The 'Real Housewives of Potomac' star releases a lengthy statement to apologize after her controversial comments from about a decade ago resurfaced online.

AceShowbiz - Candiace Dillard is acknowledging her mistake after she faced criticism for her past homophobic tweets. On Wednesday, August 12, "The Real Housewives of Potomac" star took to Twitter to issue an apology for her insensitive remarks.

"I want to address tweets that resurfaced from nearly 10 years ago that may have offended people I love dearly and those who have supported me as a Potomac Housewife," she began her lengthy statement. She thanked her "loyal fanbase, particularly the LGBTQIA+ viewers" for their "unwavering support," before going on with her apology.

"I, alone, am responsible for my words and I deeply regret saying anything that could have hurt my friends, colleagues, family and fans," she stated. "At the time I was a private citizen, speaking carelessly and crassly as we often do, and for my lack of better judgment, I am sorry."

"While I have always considered myself an ally of the LGBTQIA+ community," she wrote, "I recognize my words were insensitive and undermined the support, reverence and love I have consistently tried to demonstrate through advocacy for LGBTQIA+ rights and causes, as well as my personal relationships with those who identify as LGBTQIA+."

Candiace claimed she's "learned and matured over the past decade," but yet she's "still evolving." Admitting that the "language I used carelessly wasn't acceptable back then, and it isn't acceptable now," she added, "I acknowledge that my words were hurtful and for that I am deeply sorry."

The reality TV star assured, "In recent years, I have remained committed to the fight for equality for all." She realized "while I've personally experienced the pain pf disenfranchisement as a Black woman, I will never know firsthand the hurt many LGBTQIA+ people experience from pervasive discrimination, family rejection, barriers to employment, homelessness, homophobia, transphobia and more."

Calling the controversy "a humbling experience," she said that she remains "committed to learning and listening to become a more effective and empathetic ally." She also shared her hope that "this may serve as a teachable moment for those who are willing to listen and learn as it has been for me."

"It's imperative that we love more, have empathy, and search for understanding," she added, before concluding her statement with another apology, "I am truly sorry for my comments and I only ask for patience and understanding as I strive to evolve as a person." 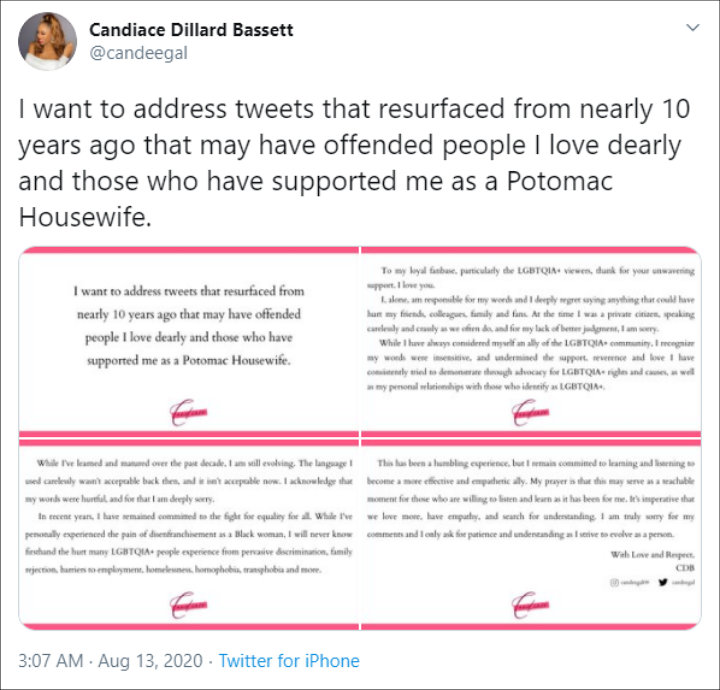 Candiace posted the statement after several "Real Housewives" fan accounts brought up her old tweets from 2010 in which she made homophobic remarks. "Queenie gay men irk me," she wrote in one tweet. Another offensive tweet by the Bravo star read, "I'm personally turned off by men who r too into fashion. It's a fine line. When u do too much, I'm disgusted. Makes me think 'gay.' "