The former pro wrestler backtracks on his initial claims on a Facebook post about a man who allegedly tried to rape him when he was 13, insisting, 'I didn't say I killed him. I said he disappeared.'

AceShowbiz - WWE legend Marty Jannetty has backtracked on his bizarre confession that sparked speculation he killed a man. In an interview on the Boston Wrestling MWF YouTube channel on Thursday, August 6, he clarified, "I said he disappeared, I didn't say I killed him. I said he disappeared."

Marty did admit though that he did everything he could to protect himself from the man who allegedly tried to rape him. "I almost got raped. If I couldn't have handled myself, that dude would've raped me," he said during the interview.

"I can't say he deserved to die, but he deserved to get his a** beat," he went on stressing. The 60-year-old described the incident, "And when I was beating him in the head with a brick, I was only trying to beat his a**, I wasn't trying to kill him."

He, however, later insinuated that he threw the man into the river. "Can you imagine dragging him to the river and throwing him in?" he said. "And then finding out on the news this guy is missing? And you know the dude. And you know more than that." Later, he offered more ominous words as saying, "All I know, man, is that no other kids had to worry about him."

Marty seemed to keep contradicting himself as he later added, "I'm not saying right now that he died, but I'm just saying a person don't need to die because they're f**ked up in the head." He also admitted that he's being investigated for the alleged crime, with his "sheriff friend" telling him a warrant had been put out for his arrest.

Marty previously raised people's eyebrows as he seemed to confess to a murder in a now-deleted Facebook post. "I was 13, working at Victory Lanes bowling alley buying weed from a f** that worked there..," he wrote on early Wednesday, August 5. "and he put his hands on me..he dragged me around to the back of the building..you already know that he was gonna try to do.."

"That was the very first time I made a man disappear..they never found him..they shoulda looked in the Chattahoochie River..," he continued. "but I promised myself way back then, nobody would ever hurt me again.." 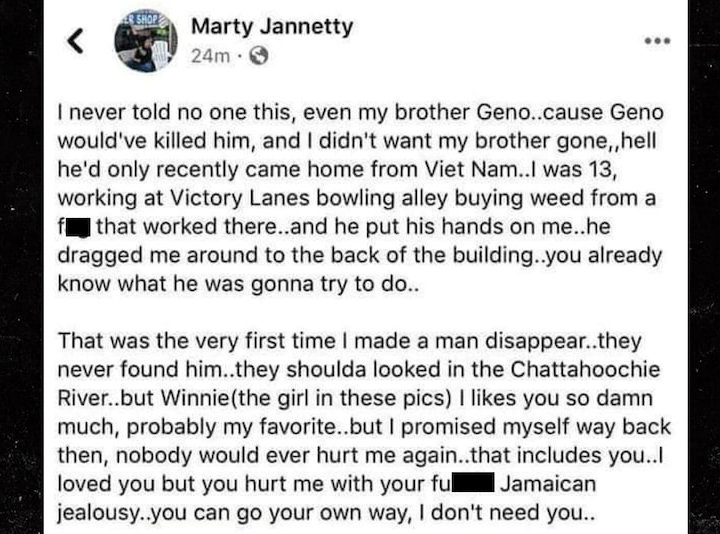 If Marty's claims are indeed true, the alleged incident would have taken place in 1973. The Columbus Police Dept. in Georgia has confirmed to TMZ that they are "look[ing] into this." A spokesperson from the homicide/cold case division added, "The first step will be seeing if we have any missing persons or unidentified remains cases that match the limited information in the post."