The 'Big Bang Theory' alum, who voices Harley Quinn on the HBO Max animated show, breaks her silence after it was reported that she and the 'Birds of Prey' star refused to work together for a Comic-Con promotion.

AceShowbiz - Kaley Cuoco is not here for people pitting a female star against one another. The actress has broken her silence after rumors surfaced last week that she and Margot Robbie were feuding with each other due to "professional jealousy."

Catching wind of the wild speculation, the former Penny depicter of CBS' sitcom "The Big Bang Theory" took to Instagram Stories on Monday, July 27 to shut down the rumors once and for all. However, instead of putting out an elaborate statement, she chose a simple yet effective word to debunk the fake news, writing below a screenshot of a tabloid's headline, "LOL." 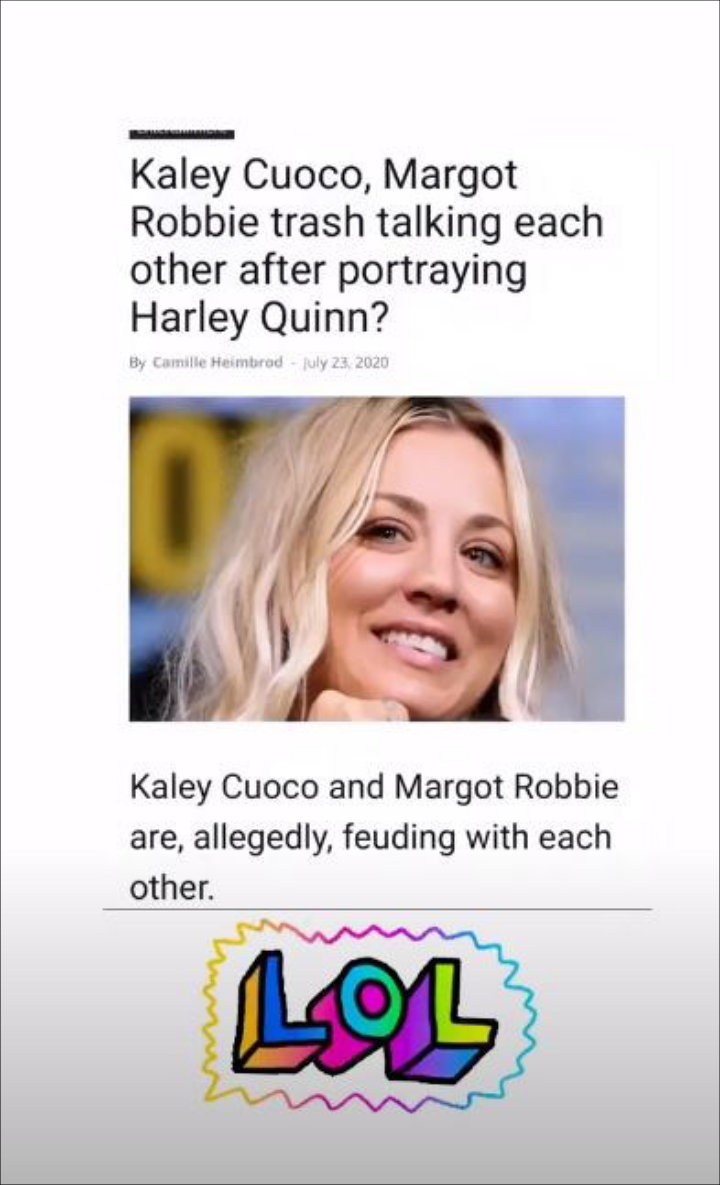 Kaley Cuoco laughed off rumors of her feuding with Margot Robbie.
See also...

Australian outlet Micky previously citing Star as reporting that the two actresses, who both portray Harley Quinn in DC Universe, couldn't get along well with each other. The tension between them was described as thick that they refused to make a joint appearance for a panel at the 2020 San Diego Comic-Con before it was canceled due to the coronavirus pandemic.

"They each balked. Not only is there professional jealousy, but they also just don't like each other," a source was quoted as saying. They were reportedly trash talking each other behind the scenes. However, the site noted, "No concrete pieces of evidence can confirm that these hearsays are correct as of this writing."

Kaley was announced to voice Harley Quinn on the DC animated series of the same title in October 2018. In a February interview with GWW, showrunner Justin Halper explained how they approached the 34-year-old actress for the role. "We met with her, we pitched out a few episodes to her and our general arc and she was very thoughtful and kind and just listened and that was kind of it," he shared. "It wasn't like she said no and then we went to Kaley, Margot just wanted to be informed."

Margot, meanwhile, first portrayed the character in 2016's "Suicide Squad" and reprised the role in a standalone movie, "Birds of Prey: And the Fantabulous Emancipation of One Harley Quinn", which was released earlier this year. She is set to return for James Gunn's "The Suicide Squad".