Responding to rumors that she fakes her anorexia to have more air time, Amelia Hamlin writes, 'Lying about a mental illness is disgusting. Something I hope nobody would ever do.'

AceShowbiz - Lisa Rinna's daughter Amelia Hamlin has broken her silence on rumors that she fakes her anorexia to be on "The Real Housewives of Beverly Hills". In a recent Instagram post, Amelia clapped back at a fan accusing her of lying while sharing a shocking statement.

"I usually don't post these. But this really got to me. Lying about a mental illness is disgusting. Something I hope nobody would ever do. I seriously can't believe I'm being accused of lying about my anorexia to get more 'air time,' " she wrote on Sunday, July 19.

She then revealed that she was "forced to be on the housewives by mom. Ask anyone it's the last thing I want to do." The 19-year-old continued, "I couldn't careless about air time. So f**k you." 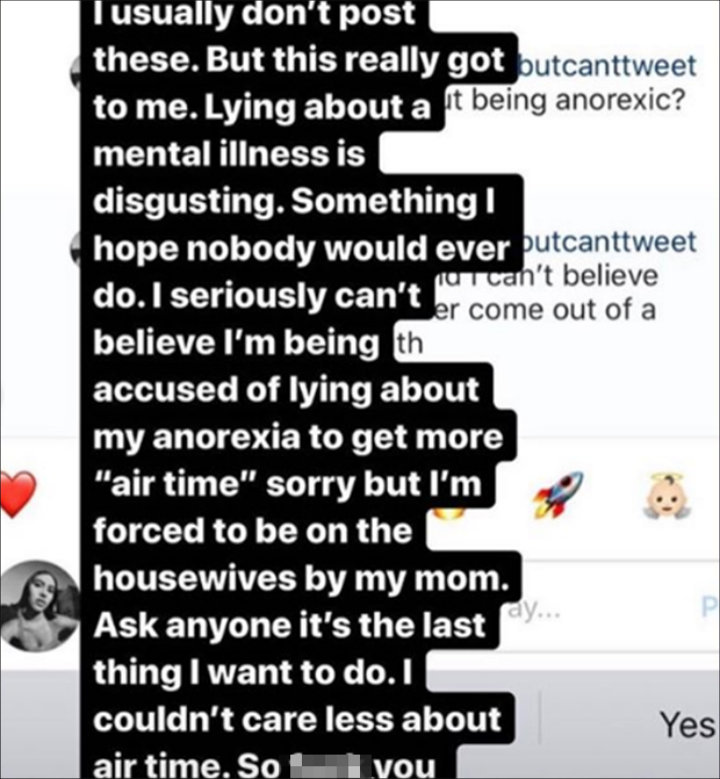 Amelia Hamlin clapped back at a hater.

Amelia first opened up about having anorexia in 2018. Later in a memorable "RHOBH" episode the year after, she told Lisa that things were so bad that she "could have died."

She further detailed her struggle in an Instagram post in the same year. "I am SO beyond humbled and grateful to have the platform that I do at such a young age," she said. "And to wake up every morning with a little girl reaching out to me and telling me I am her inspiration, really makes me feel like I have a purpose. I went through this journey not for attention, not for people to pitty [sic] me, but to help. I am on this earth to help people, and I know that."

Lisa also addressed her daughter's battle with an eating disorder in one episode of the Bravo reality show. "The scariest thing about anorexia is: Is she going to have this forever?" she said. "I don't want to see her suffer. You want to fix it. You want to make it go away. You want to erase it. You know, you just want to take your child out of pain. You don't want your child to be in pain."

'The Voice' Recap: The Top 9 Join Forces for Trio Performances