In a social media banter with his wife Chrissy Teigen, the 'All of Me' hitmaker gets candid about his latest parenting nightmare that involves their two-year-old son, Miles.

AceShowbiz - Singer John Legend truly got down and dirty over the weekend after picking up his toddler's faeces with his "bare hand".

The "All of Me" hitmaker detailed the parenting nightmare on Twitter on Sunday, July 12, after his wife, model and TV personality Chrissy Teigen, shared her pride at their two-year-old Miles' ever-growing communication skills.

However, she admitted the childhood milestone had come just a day after Miles left a real mess for his parents to clean up.

"He also took a poop log straight out of his butt and put it onto the coffee table yesterday. John can confirm!!!!!" Chrissy wrote, to which the musician replied, "facts. all facts."

John then explained how he decided to deal with the excrement - adopting a real hands-on approach: "i also picked it up with my bare hand and took it to the toilet because i give up," he joked.

His bold actions won him the applause of Chrissy, as she responded, "u really did and it was really something (sic)." 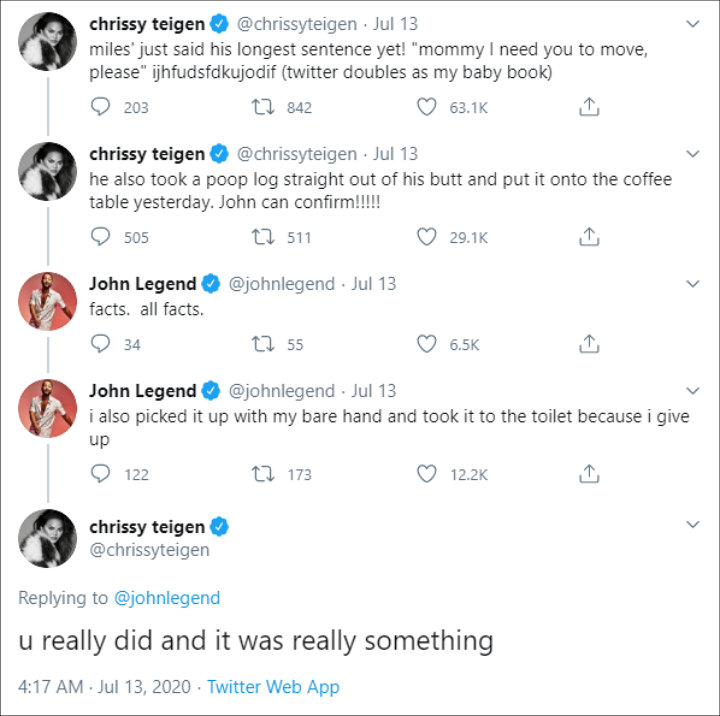 Chrissy Teigen and John Legend got candid about their son's poop incident.

However, when one follower asked if the couple had documented the incident with a photo, Chrissy, who has 13.1 million followers on the social media site, quipped, "we did not. we didn't want to embarrass him so I only decided to tell 13 million people."

John Legend Signs On As Producing Team of The Temptations Musical