This is not the first time for Draya to be trolled after posting her reacting to a movie as she previously complained about subtitle when she tried to watch South Korean movie 'Parasite'.

AceShowbiz - Draya Michele appears to have a brainslip after watching Adam Sandler's new Netflix film "Uncut Gems". The former "Basketball Wives L.A." star took to her Twitter account to discuss the movie with her followers, only to reveal that she didn't know how to correctly spell "background".

"I'm trying to watch uncut gems and is it me or is the back round music too loud? I can barely hear what they saying," she wrote on the blue bird site on Monday, July 6 before deleting it. She then added in a separate tweet which also has since been removed from her account, "Also. Is it 'back round' or 'background' ???" 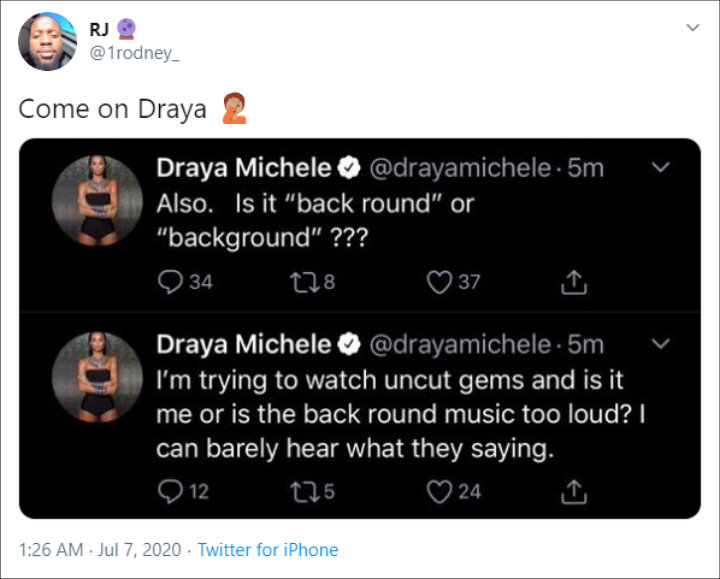 Unsurprisingly, it didn't take long before Twitter users started making fun of Draya's spelling error. "Tyrese and Draya should have a spelling bee," one fan wrote, referring to Tyrese Gibson who previously spelled his "Fast & Furious" co-star and foe Dwayne "The Rock" Johnson's name as "Dewayne".

"Lmao Draya deleted her tweet like," another user mocked Draya. Insinuating that Draya should have just checked the spell on Google before embarrassing herself, someone said, "It would have taken Draya the same amount of time to type that into Google."

This is not the first time for Draya to be trolled after posting her reacting to a movie. The TV star previously complained about subtitle when she tried to watch Oscar-winning South Korean movie "Parasite".

Sharing on Instagram Stories, she wrote, "I'm 4 mins in. Issa lot of reading." Fans roasted her for the post in no time with someone saying, "Yall act like they put whole paragraphs on the screen. It's literally like 1-2 sentences at a time. Also you can just pause the movie if you need to look at your phone or just not look at your phone and enjoy the movie."

Draya Michele Overjoyed She Could Save Teenage Girls From Potential 'Predator'