The 'John Wick: Chapter 3 - Parabellum' actress apologizes after her teasing of her role as a transgender man in an upcoming film was met with criticism.

AceShowbiz - Halle Berry has walked away from a film role that landed her in hot water. During an Instagram Live on Friday, July 3, the actress revealed that she had been preparing for a role that would see her as transgender character, but she had not been officially cast.

"[It's] a character where the woman is a trans character, so she's a woman that transitioned into a man," she teased about the role. "She's a character in a project I love that I might be doing." Sharing her preparation for the role, she added that she wanted to take a "deep dive" into "that world," likely referring to the trans community.

During the interview, Berry also misgendered the character multiple times. "Who this woman was is so interesting to me, and that will probably be my next project," she said, much to people's dismay.

One of those who criticized Berry's potential role as a transgender was the Twitter account for the Netflix documentary "Disclosure: Trans Lives on Screen", which was released last month and examines Hollywood's portrayal of transgender people and their stories. The account handler wrote, "Hi @halleberry, we heard you're considering playing a trans man in your next project. We ask that you please watch @Disclosure_Doc on @netflix first to understand how cis actors like yourself acting in trans roles has major cultural consequences offscreen. #DisclosureNetflix."

The "Kingsman: The Golden Circle" star apparently noticed the backlash and has changed her mind about taking on the role. In a statement posted on her Twitter page on Monday, she apologized for misgendering the character and for considering to tackle the role.

"Over the weekend I had the opportunity to discuss my consideration of an upcoming role as a transgender man, and I'd like to apologize for those remarks. As a cisgender woman, I now understand that I should not have considered this role, and that the transgender community should undeniably have the opportunity to tell their own stories," she wrote.

She continued, "I am grateful for the guidance and critical conversation over the past few days and will continue to listen, educate and learn from this mistake. I vow to be an ally in using my voice to promote better representation on-screen, both in front of and behind the camera."

Berry has since been praised for her gracious response to the backlash. LGBTQ+ organization GLAAD tweeted, "We are pleased that @halleberry listened to the concerns of transgender people and learned from them. Other powerful people should do the same. A good place to start is by watching @Disclosure_Doc to learn about trans representation in media." 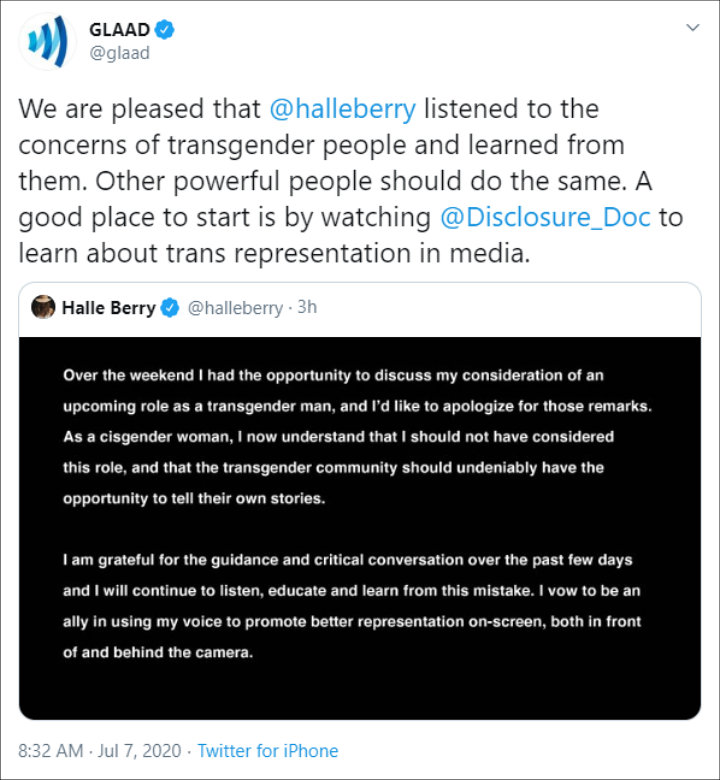 @Disclosure_Doc, which was among the first to bring up the matter, also commended the 53-year-old actress for withdrawing from the role. "Thank you @halleberry for listening and learning. We hope #DisclosureNetflix is one of many educational tools you and others can rely to inspire and strengthen allyship," it reacted to Berry's apology.

Other details of the project that Berry was considering to star in are not available since she didn't mention the title during the Instagram Live interview.

Halle Berry Loves It When Rappers Name-Drop Her on Songs