The 'What Do You Mean' singer recently made headlines after two women came forward with allegations that Justin sexually assaulted them in two different occasions back in 2014 and 2015.

AceShowbiz - Justin Bieber was photographed for the first time after two ladies came out with sexual assault allegations against the singer. In some photos that circulated online, the "Sorry" hitmaker was seen walking outside while heading to a meeting in Los Angeles on Monday, June 22, a day after he shut down the accusations.

In one of the pictures, Justin wore a red hoodie which he paired with black shorts and a pink beanie style hat. Completing his style that day, the husband of Hailey Baldwin rocked a blue pair of socks and white sneakers.

He was photographed in the middle of making a phone call. While he was not looking extremely depressed, the Canadian star looked noticeably sullen in the snap. 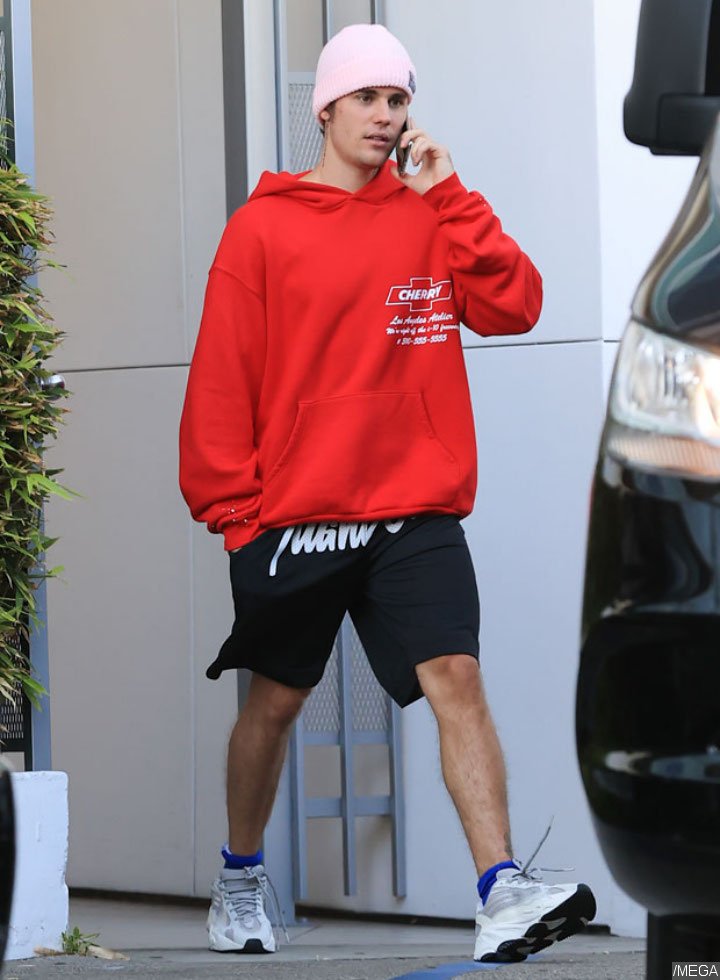 Prior to this, Justin took to his Twitter account to address the sexual allegations. Pulling out the receipts on Sunday, the "Despacito" hitmaker tried to prove his innocence. "I don't normally address things as I have dealt with random accusations my entire career but after talking with my wife and team I have decided to speak up on an issue tonight," he explained.

"Rumors are rumors but sexual abuse is something I don't take lightly. I wanted to speak out right away but out of respect to so many victims who deal with these issues daily I wanted to make sure I gathered the facts before I made any statement," Justin continued, before showing proofs in the form of photos from the night in question, hotel room receipts and old tweets.

He ended his statement by saying that he will take legal action for this issue. "Every claim of sexual abuse should be taken very seriously and this is why my response was needed. However this story is factually impossible and that is why I will be working with twitter and authorities to take legal action," Justin said.

Justin made headlines after two women came forward with allegations that Justin sexually assaulted them in two different occasions back in 2014 and 2015. A Twitter user by the name of Danielle claimed the incident took place at the Four Seasons Hotel on March 9, 2014 when he was in Houston, Texas with then-girlfriend Selena Gomez. She alleged that he first approached her at an event held by his manager Scooter Braun at Banger's Sausage House and Beer Garden in Austin.

Another women identified as Kadi, meanwhile, accused the "What Do You Mean?" hitmaker of raping her in May 2015. She claimed that the incident happened after she got invited into the "Baby" singer's room at the Langham Hotel in New York City.