Chrissy Metz prays that the late screenwriter's transition is 'full of love, light and peace,' as 'Kidding' creator Dave Holstein calls her death 'a devastating loss for those who knew her.'

AceShowbiz - Jas Waters has taken her own life. One day after it was announced that the "This Is Us" and "Kidding" writer died at the age of 39, the Los Angeles County Medical Examiner-Coroner's office offered more details regarding her unexpected passing by making public the cause and manner of her death.

On Thursday, June 11, the coroner's office uncovered that Waters passed away on June 9 from hanging. Her death has since been ruled a suicide. Three days prior, the journalist posted a short statement on Twitter. "Some s**t just changes you," it read.

Jas Waters shared thought about change days prior to death.

After the "This Is Us" writers confirmed Waters' death through a statement on Twitter, many went to social media to express their condolences. On the heels of Mandy Moore and Susan Kelechi Watson's early tributes, another one of the show's cast member Chrissy Metz reacted to the former columnist's passing by sending a prayer.

"We were graced with @JasFly on the show as a fantastic writer but to know her and her beautiful spirit was to love her. I am praying for your beautiful transition, Jas. May it be full of love, light and peace," the 39-year-old actress. "Thank you for the time we shared, your fearlessness and inspiration."

Fellow actress Reese Witherspoon has also mourned the loss of Waters. In her condolence post, she tweeted, "My heart is with the family and friends of Jas Waters. Jas was an incredibly kind woman and a truly brilliant talent. My team at Hello Sunshine was honored to collaborate with her. I send my deepest sympathies and condolences to everyone whose lives she touched."

Also turning to Twitter to honor the memory of Waters was "Kidding" creator Dave Holstein. "@JasFly was a one of a kind voice and so integral to our Kidding writing team.This is a devastating loss for those who knew her and lived in her light," he stated. "One of my fav lines of hers is resonating loud with me today: Our scars do not mean we are broken. They are proof we are healed." 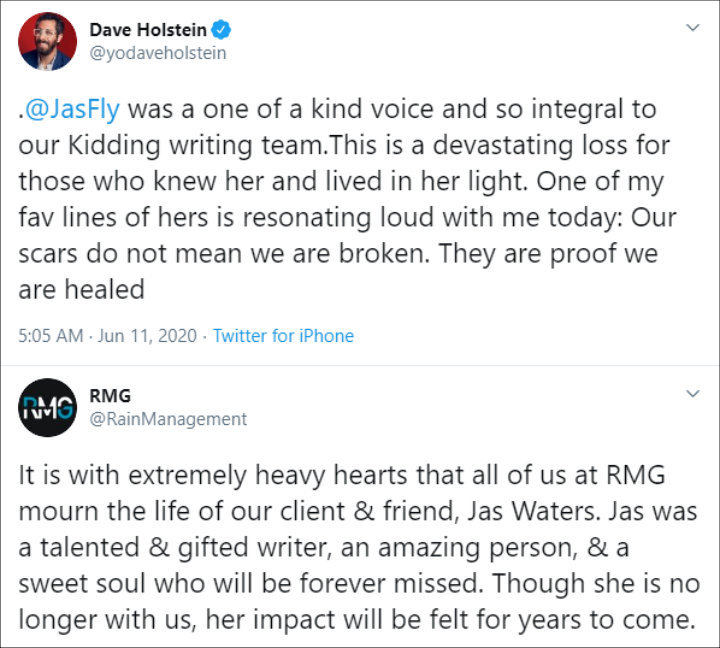 Dave Holstein and RMG mourned the loss of Jas Waters.

Waters' management, Rain Management Group, has also issued a statement following her death. "It is with extremely heavy hearts that all of us at RMG mourn the life of our client & friend, Jas Waters," it read. "Jas was a talented & gifted writer, an amazing person, & a sweet soul who will be forever missed. Though she is no longer with us, her impact will be felt for years to come."

Mandy Moore Returns to Work One Month After Giving Birth