The '9-1-1' actor weighs in on his co-star's recent statement on Instagram Live about him and his group of friends 'call each other slurs all the time' without getting butthurt.

AceShowbiz - Actor Oliver Stark has put his "9-1-1" co-star Ryan Guzman on blast for trying to defend his use of racial slurs.

Guzman took to Instagram Live on Sunday (May 31) to address recently resurfaced Twitter posts by his fiancee, Brazilian actress Chrysti Ane, who had openly used the N-word in the 2011 tweets.

She subsequently apologized, but then sparked another backlash by claiming she had felt comfortable using the slur because she had been in a relationship with a black man at the time, and "felt accepted by the black community."

"At the time none of my friends found it offensive, but I must say I didn't fully comprehend the WEIGHT of the word," Ane added. 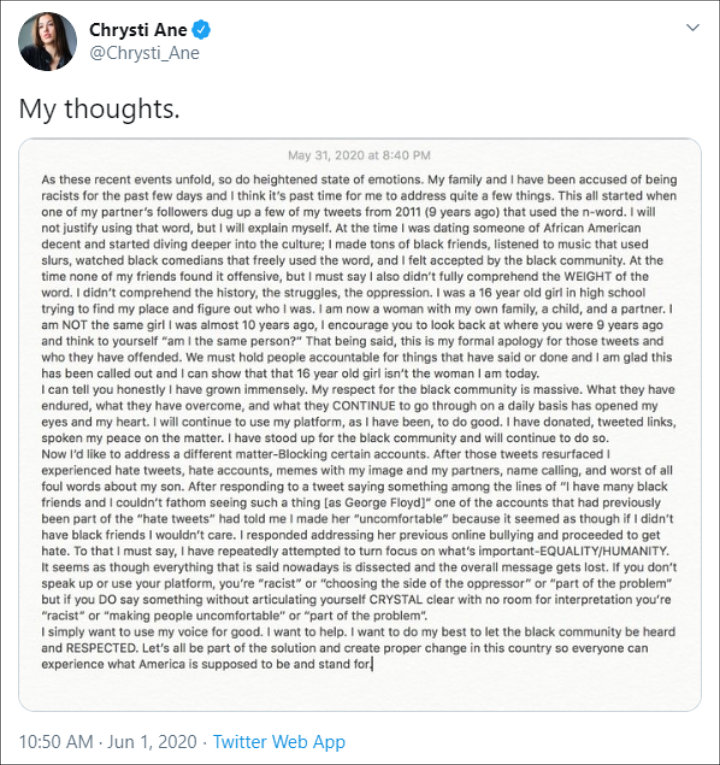 Chrysti Ane apologized for past use of the N-word.

Over the weekend, as protests continued to rage across the U.S. following the death of African-American George Floyd at the hands of a white police office in Minnesota, Minneapolis, Guzman attempted to clarify the situation by speaking directly to fans, insisting he and Ane are in no way racist, although he then also faced criticism as he revealed he and his group of friends "call each other slurs all the time."

"I have plenty of friends - Black, white, Asian, Indian, whatever they are, Korean - and we make fun of each other's races all the time," "The Boy Next Door" star continued. "We call each other slurs all the time. We don't get butthurt (offended) at all because we know the actual person, we know who each other are."

"We know that we're not trying to bring each other down. So, what are y'all trying to get at? You're trying to prove that somebody that's not racist is racist? Nah. You don't have that power. There is no racist energy coming from this household at all."

His statements only incensed some of his followers, prompting his TV co-star Stark to weigh in on the controversy online.

"I know a lot of you want to hear my thoughts on what a cast member said today on IG live," the British actor shared.

"I can tell you that my opinion is there is absolutely no excuse for the use of the N-word. It belongs to the Black community only and I absolutely don't agree with it being used by anyone else under any circumstances."

Oliver Stark slammed Ryan Guzman for defending his use of racial slurs.

Guzman has yet to respond.

Eminem Calls for Detroit to Stay Strong Amid Coronavirus Pandemic