The comedienne stirs up another controversy when she responded to CNN correspondent Jim Acosta's tweet by suggesting that the POTUS should be given 'syringe with nothing but air inside.'

AceShowbiz - Kathy Griffin is fuming at report that her controversial tweet about Donald Trump is being investigated for violation. Minutes after a breaking news editor for Washington Examiner made the claims via Twitter, the former "Suddenly Susan" actress responded by throwing some expletives in a reply post directed at him.

On Tuesday night, May 26, Daniel Chaitin tweeted an update on the story about Griffin's latest tweet, claiming that Twitter will "look into" whether hers violated their violent threats policy. In the same post, he claimed that they had also reached out to the Secret Service. His tweet prompted the comedienne to fire back, "Go f**k yourself. Do you wanna tussle with me, you f**king amateur? #100ThousandDead." 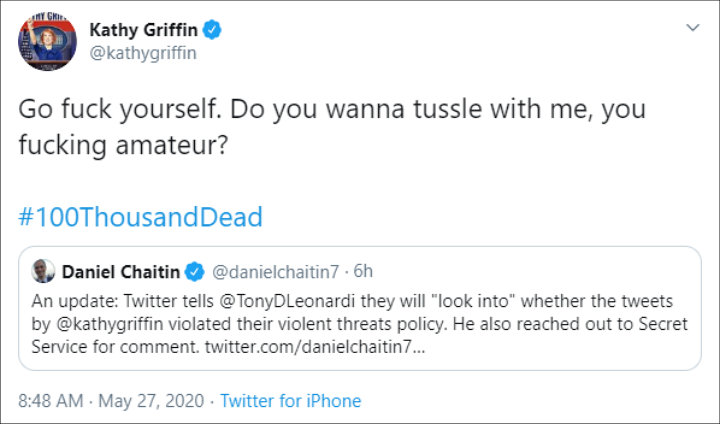 Griffin drew backlash hours earlier when she responded to a tweet from CNN's chief White House correspondent Jim Acosta, in which he reported, "Trump at diabetes event at WH: 'I don't use insulin. Should I be?' " Sharing her thought on the matter, the 59-year-old tweeted, "Syringe with nothing but air inside it would do the trick. F**K TRUMP."

Kathy Griffin stirred up controversy with tweet about Donald Trump

Washington Examiner quickly picked up Griffin's tweet and interpreted it into, "@KathyGriffin advocates for someone to stab @realDonaldTrump with syringe full of air. Air embolisms, caused by air getting into the bloodstream, can be fatal." In response, the Emmy Award winner tweeted back, "I SURE DID, F**KER. #TrumpLiedPeopleDied." 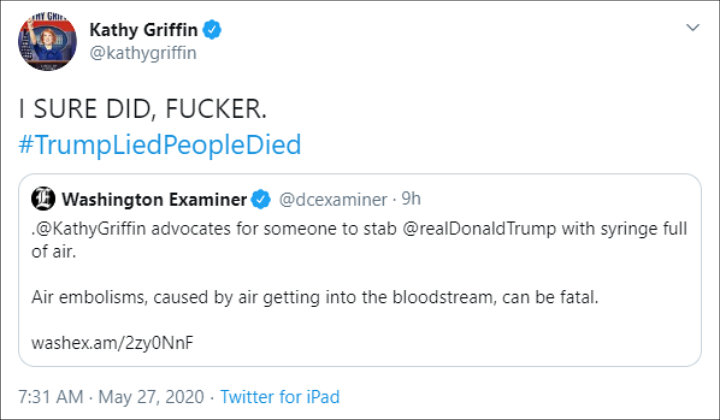 Griffin's confirming tweet outraged many of Trump's followers. "Kathy Griffin posts a tweet that calls for the stabbing of President Trump with an air-filled syringe. Perhaps twitter should suspend her and take this tweet down? Just a thought," one suggested, while another referred to her 2017 visit from the Secret Service, "I just hope she enjoys the company of the secret service ......... again." 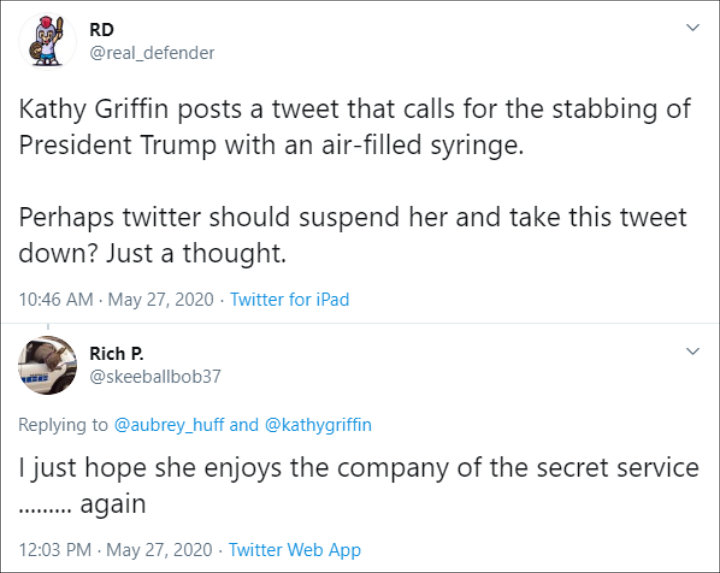 Back in December 2018, Griffin opened up about the effects of her 2017 gory photo of her holding a bloody likeness of Trump's head. Addressing the backlash during an appearance on "The Late Show with Stephen Colbert", she spilled, "A lot of people don't know this part. Actually two federal agencies, the Secret Service and the assistant U.S. attorney's office, were putting me under a two-month federal investigation and considering charging me with a crime - this is real - of conspiracy to assassinate the president of the United States."

Babyface Claims Aretha Franklin Once Sought Relationship Advice From Him

Kathy Griffin Back Home After Hospitalization Over Coronavirus Scare