Madonna Preemptively Shuts Down Critics of Her Racy Picture

The Material Girl tells those who may be offended by picture of her flashing her nipple that 'Zero F*^ks Given,' but that doesn't stop haters from accusing her of dying for attention.

AceShowbiz - Madonna has still got it and flaunts it at 61 years old. The singer, known for her eccentric lifestyle and stage acts, has set tongues wagging again with one of her latest Instagram posts in which she showed off a lot of skin.

In the image shared on Saturday, May 23, Madge stripped down to her underwear. She sat on a chair in just a sheer bra and black panties, revealing one of her nipples. She also rocked a blonde wig that partly covered her face. "Current Wardrobe Sitch," the mother of six captioned the snap.

Knowing that her racy picture would attract haters, she preemptively shut them down as adding, "And for those of you who are offended in any way by this photo then I want to let you know that I have successfully graduated from the University of Zero F*^ks Given. Thanks for coming to my Graduation Ceremony! Class of 2020!" 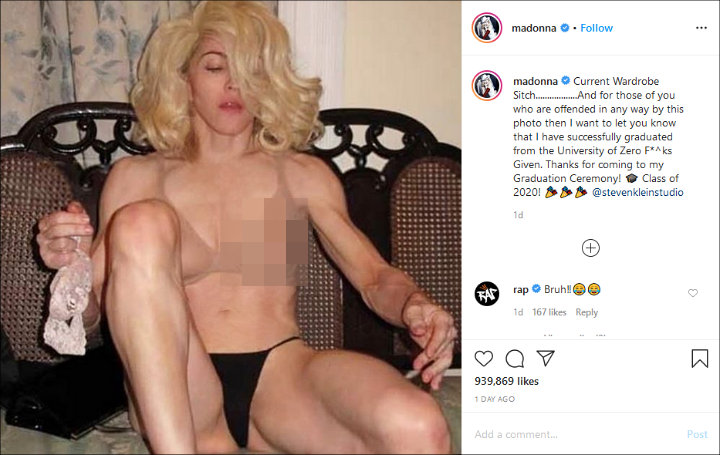 Madonna flashed her nipple in a racy picture.

That, however, didn't stop critics from coming at her. "I'm not offended. I just think you have issues," wrote a person who thinks that her racy shot was inappropriate. "I'm a nurse and seen plenty of naked folks. You aren't going to shock me if that's what you are going for. Good luck with that. I've seen plenty of dead bodies too. And murder victims. Yep you are NOT shocking me."

Some people accused her of dying for attention, with one blasting the Material Girl, "Grandma Madonna still can't get enough attention..." Another similarly commented, "Imagine being in your 60's, rich asf, have lived an ICONIC life and you still want the attention of a teenager or young adult? Whew.. the insecurity and boredom."

Responding to Madonna's caption, a fourth user wrote, "Oh you definitely give a f**k or otherwise you would not have posted the picture...so stop bulls**ting!!" Someone else added, "Don't think anyone gives a flying F**K much less..2 S**TS about you!!! At least I know MANY people have lost all respect for you!!! And you know why."

Some others alleged that she was high on drug when the photo was taken. "She looks super high in the face tho," one of them remarked. Another asked, "Crack? Is that crack you smokin'."

However, there were still fans who praised the Queen of Pop's fit physique. "Madonna is 61 years old. If y'all look this good at SIXTY ONE thank God. Haters," one of them clapped back at the critics. "Her body looks great," another echoed, while one other user added, "She looks good lol."