The rock and roll pioneer has been laid to rest at the Oakwood University Memorial Gardens Cemetery in Huntsville following a short and private funeral service.

AceShowbiz - Little Richard has been laid to rest. Nearly two weeks after his passing due to bone cancer, the rock and roll icon was buried at the Oakwood University Memorial Gardens Cemetery in Huntsville, Alabama following a private funeral attended by family, close friends and former band members.

The "Good Golly Miss Molly" singer's funeral service started at 11 A.M. on Wednesday, May 20. PEOPLE reported that an Oakwood University professor shared footage from the funeral on Facebook which saw the university's president Leslie Pollard making an address to the small crowd gathering.

Benjamin Browne, the former president of the South Central Conference of the Seventh-Day Adventist church in Tennessee, offered words of comfort, while Richard's niece Brandie Inez Sutton performed a song during the service. TMZ, meanwhile, reported that an eulogy was delivered by Dr. Carlton P. Byrd, and the closing remarks came from family spokesman David Person.

"I last spoke to him about two or three weeks ago. I knew he wasn't well but he never really got into it, he just would say 'I'm not well.' He's been suffering for many years with various aches and pains," Alen continued. "He just wouldn't talk about it much."

In the wake of Richard's death, many turned to social media to mourn the loss. Among them was Elton John who wrote, "Without a doubt - musically, vocally and visually - he was my biggest influence. Seeing him live in my teens was the most exciting event in my life at that point. Goosebumps, electricity and joy came from every pore." 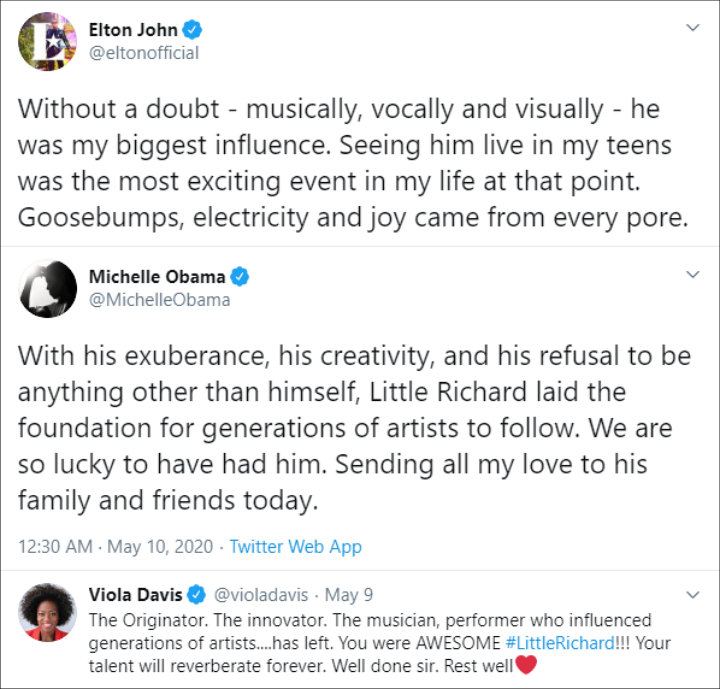 Actress Viola Davis and former First Lady Michelle Obama have also paid their tribute. Viola, who dubbed Richard "The Originator, gushed, "Your talent will reverberate forever," while Michelle tweeted, "With his exuberance, his creativity, and his refusal to be anything other than himself, Little Richard laid the foundation for generations of artists to follow. We are so lucky to have had him."

Rock and Roll Pioneer Little Richard Passed Away at 87