Teary Amanda Kloots on Nick Cordero's Recovery Setback: It's Not How His Story Ends

One week after joyfully announcing that her Broadway star husband had woken up from his coma, Amanda Kloots reveals he is in need of 'mega-prayers' since his health is 'going a little downhill.'

AceShowbiz - Nick Cordero is facing another bump on the road to his recovery from the novel coronavirus. Around one week after the Broadway star woke up from his medically induced coma, his wife Amanda Kloots emotionally opened up to her social media followers that his health has started to go "a little downhill."

Making use of Instagram Story on Wednesday, May 20, Amanda shared an update on Nick's condition in a video from her car. "Okay guys, so here in the car to blast that song because I just needed some stereo sound strength. Nick has had a bad morning. Unfortunately, things are going a little downhill at the moment," she first admitted after banging her head along to the song "Carry On".

"So I am asking again for all the prayers, mega-prayers right now," she continued while holding back tears. Informing fans that she won't be able to do her afternoon Instagram Live, she added, "Please cheer and please pray for Nick today, and I know that this virus is not going to get him down. It's not how his story ends, so just keep us in your thoughts and prayers today, thank you."

In addition to the video update, Amanda has also posted a black-and-white photo of Nick on Instagram. Along with it, the fitness instructor wrote in the caption, "Mega prayers for this special man right now. God continue to grant miracles."

Hours earlier, Amanda shared with followers that Nick was still having issues with his left lung. In an Instagram Story she posted on late Tuesday night, she detailed, "Nicks right lung is looking better. For two days it's been clear! The left lung is the same. So the left lung is still causing issues that we need to get clear. Prayers for LEFT LUNG CLEARING!" 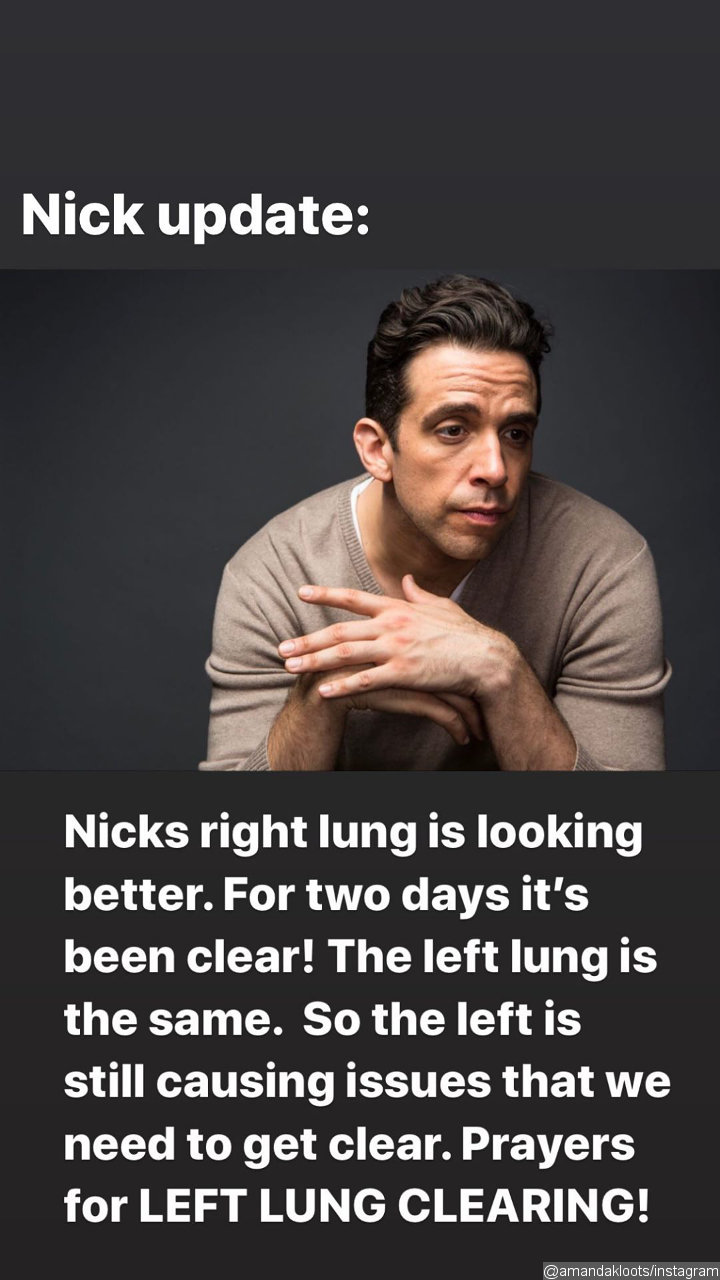 Nick was admitted to Cedars-Sinai Medical Center in Los Angeles, California in late March. Weeks later, doctors were forced to amputate his leg since a series of blood clot issues hampered his recovery from COVID-19. He was also fitted to a temporary pacemaker because of an irregular heartbeat. On May 12, Amanda brought out the good news that he has finally awaken after weeks in intensive care.

Having shared a joyful video to break the news, the mother of one followed it up with a written note on Instagram Story. "Nick is awake! He is extremely weak, so weak that he can't close his mouth," she dished. "But he is following commands which means his mental status is coming back!" Days later, she said that the nurses were positive about him walking out of the hospital.