The 'Justice League' actor has been spotted trying to break into his own Los Angeles home after returning from a dog walking outing with girlfriend Ana de Armas.

AceShowbiz - Ben Affleck has turned to be a real-life superhero for Ana de Armas. On Thursday, May 7, the actor tackling the role of Batman in "Justice League" was forced to climb over the high gate of his home in Los Angeles while his actress girlfriend watched over after the lovebirds found themselves being locked out.

Photos of the 47-year-old actor displaying his athletic skills have since made their way out online. From the pictures, it could be safely assumed that the scaling incident took place after he and his 32-year-old partner returned from their dog-walking trip around the neighborhood amid the coronavirus pandemic.

On the occasion, the ex-husband of Jennifer Garner sported a T-shirt emblazoned with the words "Believe in Boston". To complete his look for the day, he put on a pair of dark jeans and a pair of gray sneakers. His partner, in the meantime, went out in a floral print dress that she paired with flat-soled shoes. Both have medical masks covering their faces. 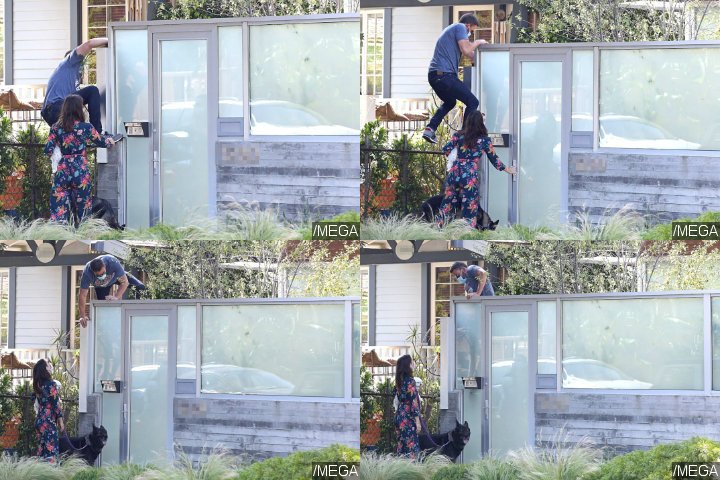 Later that day, Ana was seen out and about with her dog once again. This time, however, she did not wear any protective mask, and shared a selfie she took on her Instagram account. Putting out the black-and-white shot of herself, she added a simple note along side it, "Afternoon walk."

One day earlier, the couple were also spotted taking their dogs for a walk. About their growing relationship, a source previously told PEOPLE, "They seem to have a great time together. They order delivery food and groceries and only leave the house for walks around the neighborhood with their dogs. Ben looks incredibly happy. They are flirty and goofy. Ana always has a huge smile around him."

Ben's gate-scaling display came days after Ana made their relationship Instagram official. On April 30, the new Bond girl in "No Time to Die" teased a peek at her 32nd birthday celebration, sharing two photos of her and her "Deep Water" co-star wrapping their hands around each other while enjoying a dessert view.