Making her romance with the 'Justice League' actor Instagram official, the Bond girl in 'No Time to Die' shares photos of them celebrating her milestone with a desert getaway.

AceShowbiz - Ana De Armas continues to flaunt her romance with Ben Affleck. Nearly one month after she and the Hollywood actor were first spotted enjoying each other company during a Cuban getaway, the "Knives Out" actress made their relationship Instagram official as she celebrated her 32nd birthday with a dessert getaway.

On Thursday, April 30, the Cuban-Spanish beauty offered friends and fans a look at her birthday celebration through a post on the photo-sharing site. Most of the pictures captured the ambiance of her private party, but two in particular saw her and her actor boyfriend wrapping their hands around each other. 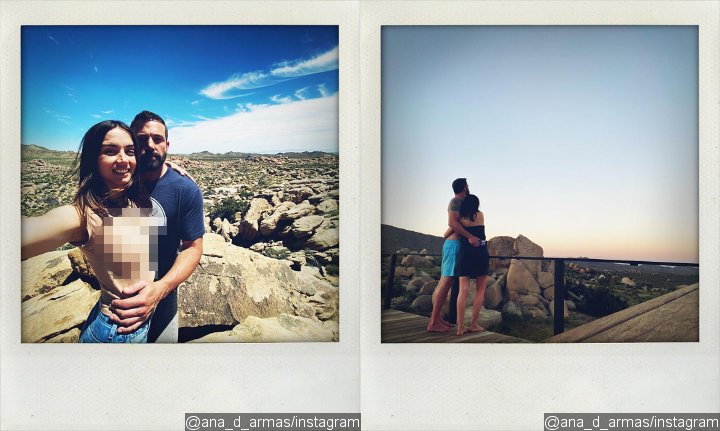 Along with the series of pictures, the actress who will be seen as a new Bond girl in "No Time to Die" expressed her gratitude to those wishing her a happy birthday. "Thank you all so much for the birthday wishes and love! Cheers to another great year," she wrote, before repeating it in Spanish, "Gracias a todos por los mensajes de cumpleanos y el amor. Un brindis por otro ano maravilloso."

Ana and Ben have been spending time together in self-isolation since they returned from their romantic getaway in Cuba and Costa Rica amid the coronavirus pandemic. On March 23, the couple were photographed sharing a kiss while walking her dog, Elvis, near his Brentwood home in Los Angeles.

While Ben has remained relatively quiet over his romance with her, Ana has been raving over her "Deep Water" co-star. Speaking about working with the 47-year-old actor on the upcoming thriller, she told Vogue Spain, "The first time we read the scenes together, it became pretty clear he was going to do something exceptional with a very complex role."

"His character is the engine of the story and requires him to move between tragedy and irony or between realism and the most absurd comedy," she went on gushing. "Not only does he know how to do it with ease, he also manages to surprise you in every shot. His talent is infinite."