The 'Stupid Love' songstress goes completely naked while channeling a cyborg in the computer-generated image as she says, 'I believe we're making art, this isn't pornography.'

AceShowbiz - Lady GaGa has stripped down to her birthday suit for the sake of art. The singer/actress is featured completely naked in the cover for the latest issue of Paper magazine, showing off her bare backside while channeling a cyborg.

The photo shows the "Born This Way" singer being hooked up to multiple machines, with her back arched and arms reaching up. Another version of the cover has her sitting on the back of a bionic horse, which appears to be in a duel with another mechanical horse. 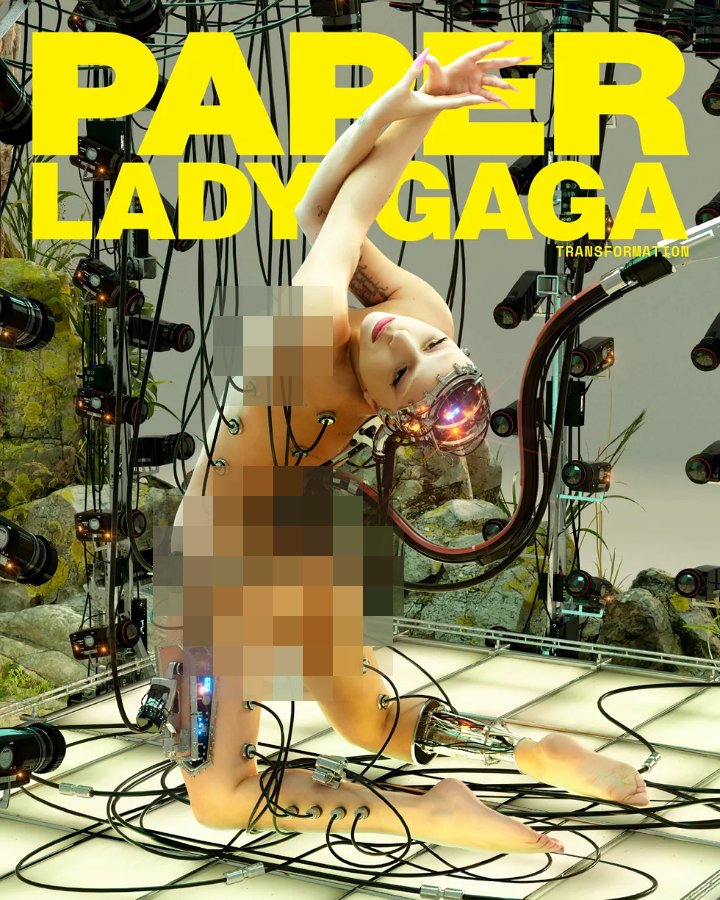 Lady GaGa on the cover of Paper magazine.

For the futuristic-themed photos, the "A Star Is Born" actress posed with no single piece of cloth on, but she didn't mind it. "I consent to being nude with everyone in this room," she said during the photo shoot, before taking off her custom Versace robe. "I believe we're making art, this isn't pornography."

Belgian artist Frederik Heyman also took a full body scan of GaGa with 3D cameras, so he could use a "GaGa avatar" to recreate her image in "various digitally constructed environments." The multimedia cover shoot was planned by her team in conjunction with the release of her upcoming album "Chromatica", which is due out on April 10.

During the photo shoot, she rejected wearing head-to-toe designer clothing, instead opting for "a more fucked-up" fashion direction. "It doesn't need to go together, it just needs to be upsetting," she said, as the magazine noted that she pointed "lovingly to a pair of flame-printed panties."

Speaking of her new album, GaGa explained it's named after a world "that celebrates all things," where "no one thing is greater than the other." As the magazine described it, the album's songs "are something of an antidepressant for GaGa - the lyrics and melodies have temporarily relieved her from excruciating pain and the trappings of fame."

The 33-year-old also linked her album to her fibromyalgia diagnosis, which she announced publicly in 2017. "Essentially it's neuropathic pain: My brain gets stressed, my body hurts," she explained the illness, before opening up about dealing with the pain. "[I'm] angry at my body, angry at my condition, angry that when I'm stressed my body hurts," she said.

Having got through this dark period which she called "radical acceptance," GaGa said her upcoming album is a reflection of her "dancing through her pain." She teased what to expected in the set, "We don't stop being that happy. You will hear the pain in my voice and in some of the lyrics, but it always celebrates."