The Pixies have also postponed their remaining Australian shows in Brisbane, Sydney and Perth, while Bikini Kill announce they will be rescheduling their March tour.

AceShowbiz - My Chemical Romance have postponed their upcoming tour dates in Japan due to the global coronavirus pandemic.

The band, fronted by vocalist Gerard Way, had been due to take to the stage for a headline show, as well as performing at the Download and Dirty Honey festivals on March 28, 29, and 31, respectively.

However, in a statement posted to their Twitter page on Thursday, March 12, the rock band announced they would be pushing back the dates on the advice of medical professionals.

"The promoter of our Japan shows suggested that we postpone the shows in Japan for the safety of the public, and we are heeding that advice," they wrote.

"Please know we are working on rescheduling shows and will try to announce those soon. We are terribly sad to postpone, and even more distressed about what is happening the world over."

The group are the latest in a string of big names to postpone or cancel tour dates because of the coronavirus. 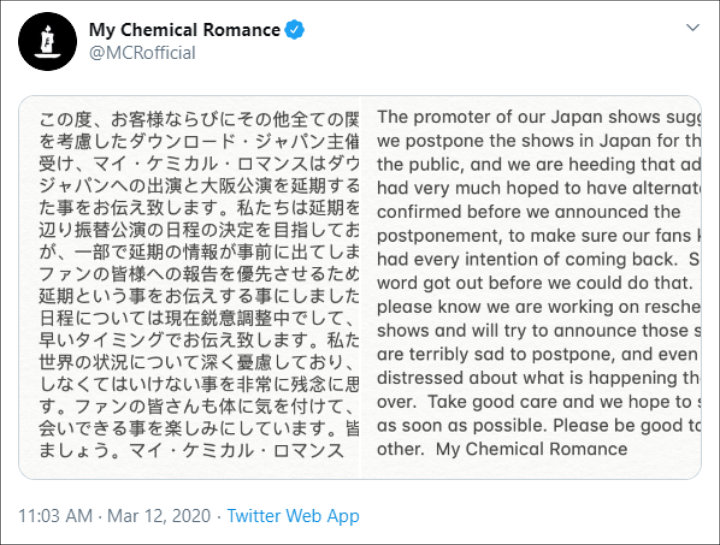 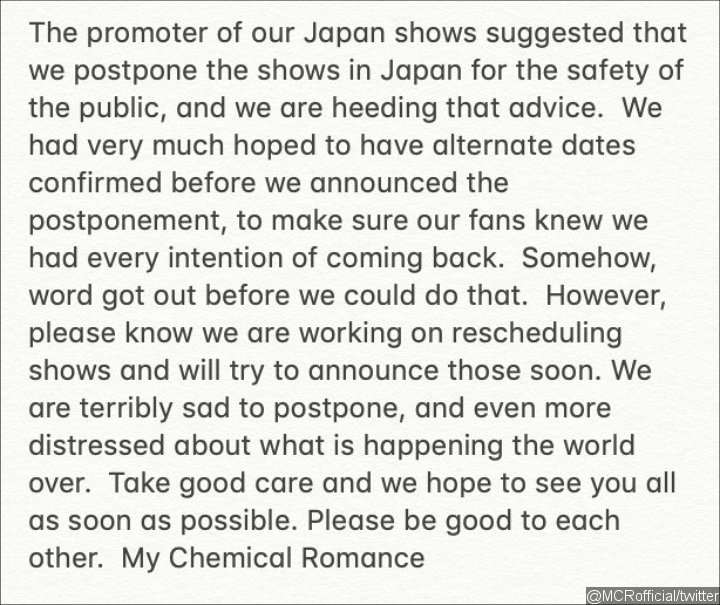 The Pixies had been due to conclude their tour of Australia in the coming weeks, but said in a statement that they are postponing the dates.

"Out of caution for current public health concerns, Pixies are postponing the remaining Australian shows in Brisbane, Sydney and Perth," they wrote. "This was an extremely difficult decision, but the well-being of our fans is always our top priority. Rescheduled dates for all of these shows will be announced soon."

Meanwhile, Bikini Kill also announced they'd be rescheduling their March tour, tweeting, "We take the health and safety of our supporters, crew and opening bands very seriously, and given the situation in Seattle as well as the lack of information about the actual infection rate of the surrounding areas, it doesn't make sense for us to go forward with any of the shows in the region." 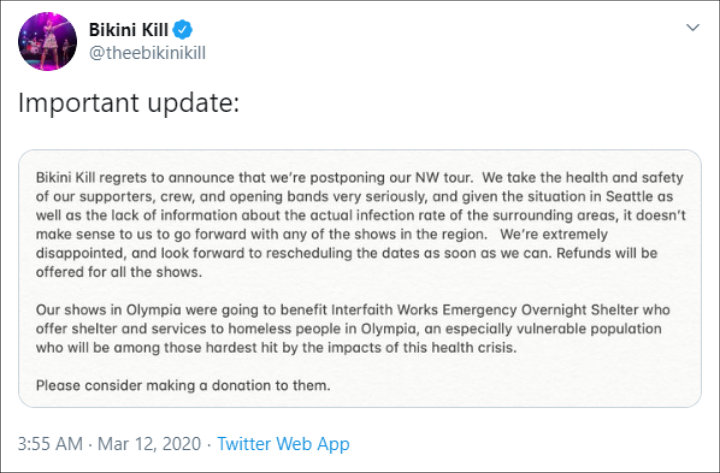 All three postponements came just hours after the World Health Organisation (WHO) declared that the spread of coronavirus globally can now be considered a pandemic.

My Chemical Romance Calls Off Comeback Show Amid Coronavirus Crisis

My Chemical Romance Booked as Headliner at 2020 Aftershock Festival