The 'Pretty Brown Eyes' singer pulls out of a scheduled appearance at Crowne Plaza Coogee Beach in Sydney days after girlfriend Miley Cyrus axed her bushfire relief concert in Melbourne.

AceShowbiz - Cody Simpson has cancelled a trip home to Australia amid the coronavirus pandemic.

The 23-year-old singer has pulled out of a scheduled appearance at Crowne Plaza Coogee Beach on Thursday night, March 12, just days after his girlfriend Miley Cyrus announced she had axed her bushfire relief concert in Melbourne.

A spokesman for Cody's gig writes: "Cody Simpson's trip to Australia and subsequent appearance in Sydney at the Estate launch on March 12 been cancelled in response to the current global health crisis."

Miley told fans she had been advised not to fly to Australia on Tuesday.

"Due to the recommendations of local, state, federal and international government authorities, including the Center for Disease Control, to reduce potential health risks in response to the current global health crisis, we are no longer traveling to Australia for the show," she tweeted. "I am so disappointed to not be there, but I have to do what is right to protect the health and safety of my band and crew."

"I will still be making a donation to help the victims of the Australian bushfires. I'm sorry to miss everyone in Australia, but I will be back soon." 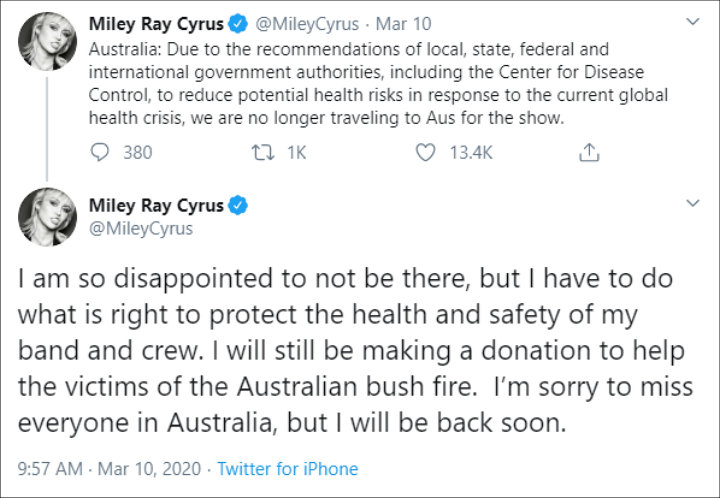 News of Simpson's concert cancellation came shortly after Tom Hanks revealed he and his wife had tested positive for coronavirus, aka COVID-19, in Australia.

"We felt a bit tired, like we had colds, and some body aches," Tom wrote on social media. "Rita had some chills that came and went. Slight fevers too. To play things right, as is needed in the world right now, we were tested for the Coronavirus, and were found to be positive."

He added: "We Hanks' will be tested, observed, and isolated for as long as public health and safety requires. Not much more to it than a one-day-at-a-time approach, no?."

Australia has recorded more than 130 cases of coronavirus.