In a legal warning issued by his lawyers, the hip hop group member stresses that he 'has not endorsed any political candidate in this election cycle and any suggestion to the contrary is plainly untrue'.

Group co-founder Chuck D signed up to perform on Sunday (March 01) with his offshoot band, Public Enemy Radio, at a Los Angeles rally for the candidate, who is running for the Democratic nomination to face off against President Donald Trump in November.

But many media reports and posters promoting the event simply noted the appearance of Public Enemy - and Flav is fuming.

In a legal warning issued by his lawyers, the 60-year-old insists neither he nor the iconic "Fight the Power" hitmakers as an entity have made an official 2020 election endorsement, and he wants to keep it that way.

"While Chuck is certainly free to express his political views as he sees fit - his voice alone does not speak for Public Enemy," Flav's attorney, Matthew H. Friedman, wrote.

"The planned performance will only be Chuck D of Public Enemy, it will not be a performance by Public Enemy... To be clear, Flav and, by extension, the Hall of Fame hip hop act Public Enemy with which his likeness and name have become synonymous has not endorsed any political candidate in this election cycle and any suggestion to the contrary is plainly untrue."

Taking particular issue with a rally poster advertising the partnership of "Bernie Sanders + Public Enemy" at the gig, Friedman continued, "It is unfortunate that a political campaign would be so careless with the artistic integrity of such an iconoclastic figures in American culture (sic)."

On Saturday, Chuck D hit back at his original bandmate, who has more recently made a name for himself on reality TV, threatening to boot him out of the legendary group altogether.

"Flavor chooses to dance for his money and not do benevolent work like this," he responded. "He has a year to get his act together and get himself straight or he's out."

Chuck's attorney went on to insist his client "could perform as Public Enemy if he ever wanted to" because "he is the sole owner of the Public Enemy trademark," but on Sunday, the 59-year-old took to Twitter to make it clear he wasn't picking a fight with Flav over politics, because his old pal doesn't keep up to date with current affairs.

"It's not about BERNIE with Flav... he don't know the difference between BarrySanders or BernieSanders (sic)," Chuck tweeted, referencing the backlash Garth Brooks recently received from some fans who had mistaken the country superstar's Barry Sanders football jersey for an endorsement of the Vermont Senator. 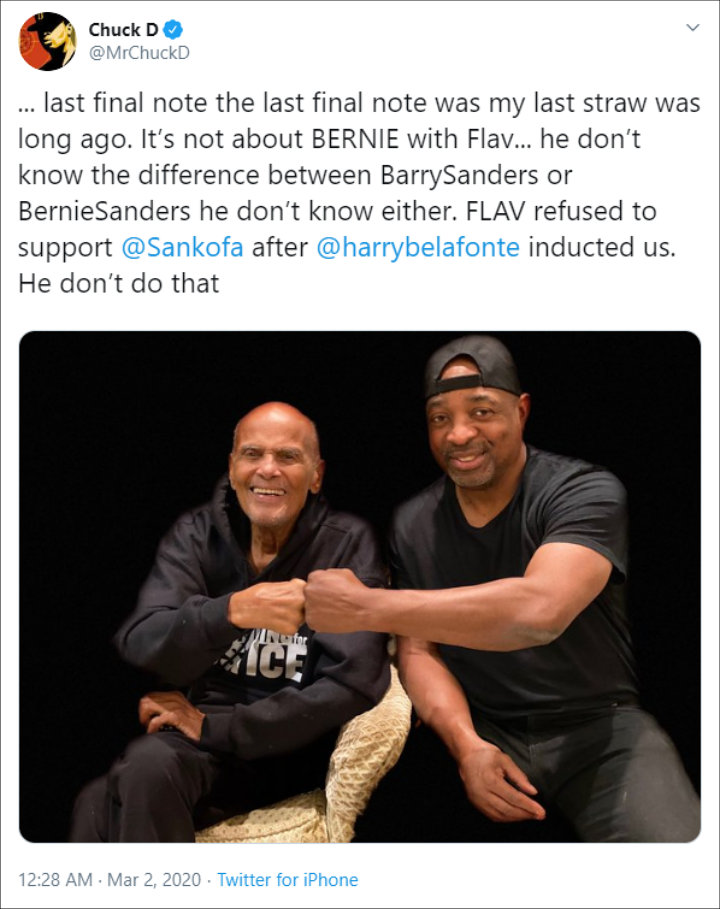 "So I don't attack FLAV on what he don't know," Chuck continued. "I gotta leave him at the crib so y'all trying to fill his persona with some political aplomb is absolutely'stupid' Obviously I understand his craziness after all this d**n time. Duh you don't know him from a box of cigars or me either (sic)."

Flavor Flav Admits He Used to Spend $2,600 a Day on Drugs for 'Six Years Straight'