The Mr. Nancy depicter hits back at his former 'American Gods' co-star after the latter suggested the racism story was just Jones' tactic to gain public sympathy.

AceShowbiz - Orlando Jones shared DMs from his former co-star Ricky Whittle who plays the lead role on "American Gods". In his private message, Whittle expressed his dissapointment towards Jones for telling the public in December 2019 that he was fired from the Starz television series because of his race.

Whittle disagreed with Jones. The British actor described the situation as "incompetence" and not "racism." He suggested Jones only used the race card to get back at the producers because Jones was angry. He also slammed Jones for putting him and the other cast members in an awkward situation.

He accused Jones of faking his racism claims, "Using the racism card to burn ur friends house down is clever but we both know it's just incompetence not racism & we are caught in the crossfire. U have put me and the cast in a bad situation that's unfair. I get ur angry, I get THEY cost u money, We totally had ur back on the incompetence, but pulling the race card to insight public trolls is a bulls**t tactic & u know it."

"I'm proud of all the powerful ethnic stories we are telling this season & yes I wish you were still here," Whittle added. "Honesly, I hope to remain friends but have to say what ur causing is upsetting & im disappointed."

While Whittle wrote a lenghty message, Jones responded with a very short message. "So am I," so he replied to Whittle's disappointment.

Whittle responded by admitting Jones "wrote some beautiful stuff and really helped get us through a tough season 2," but he insisted he and the other cast members just didn't understand "where the racism card comes in."

Getting no reply from Jones, he eventually wrote another message, "I know you're just looking after you and yours, I respect that. Good luck, we always have love for you man and hope you get what you want fella #bless."

Jones chose to respond to Whittle publicly. He scoffed at his former co-star, saying it was a little too late for Whittle to reach out to him. "This person didn't call me in September when I was fired or November or December. Has my cell, email, WhatsApp etc," he revealed, adding that Whittle only sent him DMs because of the SAG investigation.

Jones continued to put Whittle on blast over his seemingly fake concerns, "This man has no idea what transpired between me, Freemantle and Starz. Nvr asked. Nvr cared. Now he says he's 'caught in the crossfire.' He also says, 'I'm using the racist card to burn ur friends house down.' " 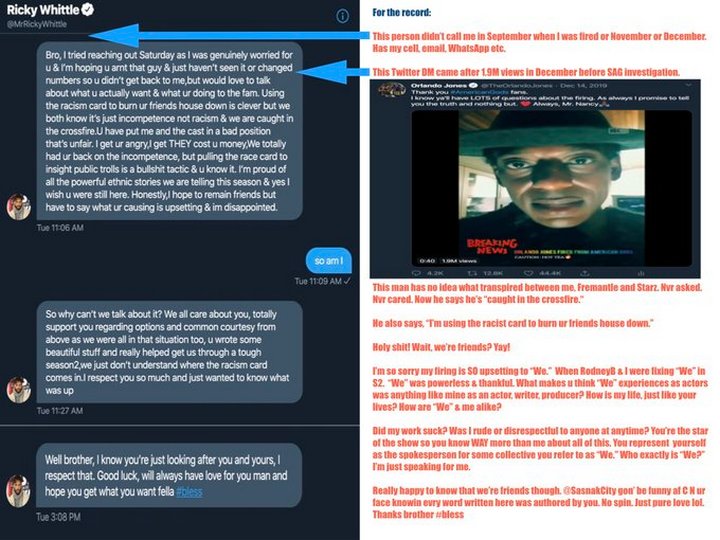 He continued, "I'm so sorry my firing is SO upsetting to 'we.' When RodneyB & I were fixing 'we' in s2. 'We' was powerless & thankful. What makes u think 'we' experience as actors was anything like mine as an actor, writer, producer? How is my life, just like your lives? How are 'we' & me alike?"

Oprah Winfrey Falls While Talking About Balance on Stage