While his former co-star slammed showrunner Charles H. Eglee for his firing, the actor portraying The Jinn shares his gratitude for being given the opportunity to play a 'positive' Middle Eastern character.

AceShowbiz - "American Gods" star Mousa Kraish has been eliminated from the series just days after Orlando Jones announced his own controversial firing from the show.

Kraish, who portrayed the Jinn on the Starz series since season one, took to Twitter on Sunday, December 15 to confirm he will not be returning for the show's third season. And in the heartfelt post, he revealed what it has meant to him to play such a "positive" Middle Eastern character who was also a member of the LGBTQ community.

"I can confirm that I wasn't asked to come back this season," he wrote. "It has been an honor to play the Jinn & live in his fiery eyed skin. This character has introduced me to so much and I was proud to represent not just the Middle Eastern community in such a positive role you don't normally see television but also the LGBTQ community that supported this character of color that you don't see on television."

Kraish did not explain why he was let go from the series but the news comes after his former co-star Jones took to social media to share a series of scathing videos in which he slammed "American Gods" showrunner Charles H. Eglee, and revealed he was "fired" from the production. 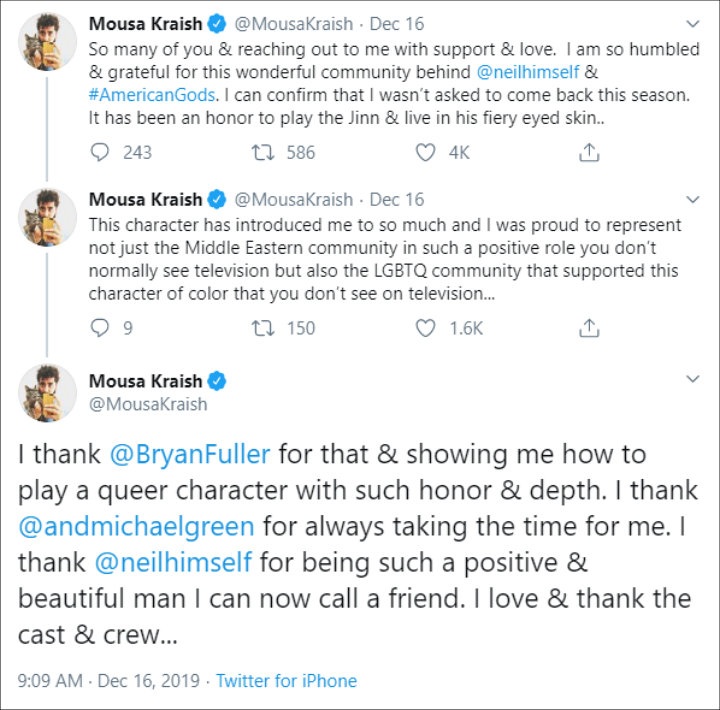 Mouska Kraish revealed he was let go from 'American Gods'

"I'm not going to name names but the new season 3 showrunner is Connecticut born and Yale-educated, so he's very smart and he thinks that (my character) Mr. Nancy's angry, get s**t done is the wrong message for black America (sic)," he raged in a video posted on Twitter and Instagram on Saturday, December 14. "This white man sits in that decision-making chair and I'm sure he has many black BFFs (best friends forever) who are his advisers and made it clear to him that if he did not get rid of that angry god Mr. Nancy he'd start a Denmark Vesey (19th century slave revolt organiser) uprising in this country. I mean, what else could it be?"

However, a spokesperson for the show's production company, Fremantle, told Deadline the decision not to renew Jones' contract was solely based on the fact that his character does not feature in the upcoming storyline.

"The storylines of 'American Gods' have continually shifted and evolved to reflect the complex mythology of the source material," the statement read, referencing British author Neil Gaiman's fantasy novel of the same name on which the series is based. "Mr. Jones' option was not picked up because Mr. Nancy, among other characters, is not featured in the portion of the book we are focusing on within Season 3."

Oscars 2020: 'Parasite' and 'Pain and Glory' Make It Into Best Foreign Film Shortlist