The Grammy winner previously announced the now-infamous item during an interview with 10 Magazine, in which she explained that she got the inspiration to make the new fragrance from her 'superpower.'

AceShowbiz - When Erykah Badu revealed that she was developing an incese that smells like her vagina, most people are baffled. However, it seems like many others are interested enough to be the product once it's available to purchase on her new digital store Badu World Market on Thursday, February 20.

According to a report, the infamous fragrance, which is named "Badu's P***y", sold out within hours. The official account of Badu World Market announced the news on Twitter, "aint no mo' p***y. #SOldOut." 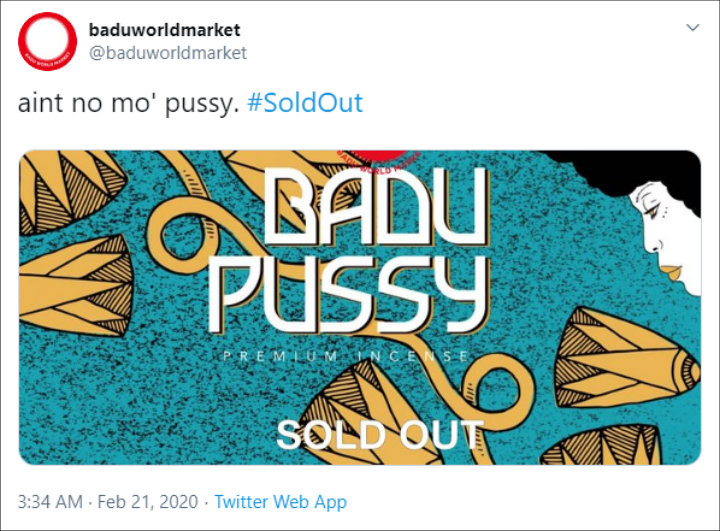 Erykah Badu's store announced that the vagina-smelled perfume has sold out within hours after the release.

"Well somebody need to go make some MOOOOOO!!!" a fan demanded. "Damn! I want some!" one other said while someone asked them to "restock" the fragrance.

The news of the perfume getting sold out so fast still shocked and stunned fans at the same time. "So Erykah Badu's coochie scented perfumes sold out," one tweeted alongside of a GIF of someone being surprised. "Erykah Bady's cooch perfume sold out... who bought it lol. I even't mad at sis though lol."

The Grammy-winning singer announced the new item during an interview with 10 Magazine, in which she explained that she got the inspiration to make the new fragrance from her "superpower." It is said that the perfume an "olfactory tribute to what Badu calls her 'superpower.' "

Erykah also detailed the process of making the fragrance which included her own undergarments. "I took lots of pairs of my panties, cut them up into little pieces and burned them," she explained. "Even the ash is part of it."

She went on revealing that she no longer wears underwear, so she didn't care about offering them up. "The people deserve it!" she exclaimed.