The 'Playing Games' singer posts a cryptic message that reads, 'Idc if I'm 'canceled' I offend someone everyday,' after being slammed for engaging in the HIV stigma.

AceShowbiz - Summer Walker shows no remorse after garnering backlash for making a controversial comment about HIV. Instead of apologizing or backtracking on her previous remark, the 23-year-old singer hinted that she's unfazed by the criticism against her.

On Tuesday, February 18, the "Playing Games" hitmaker updated her Instagram Stories with a cryptic post. She wrote over a plain black background, "Idc if I'm 'canceled' I offend someone everyday wtf is new," without any mention whom she recently offended. 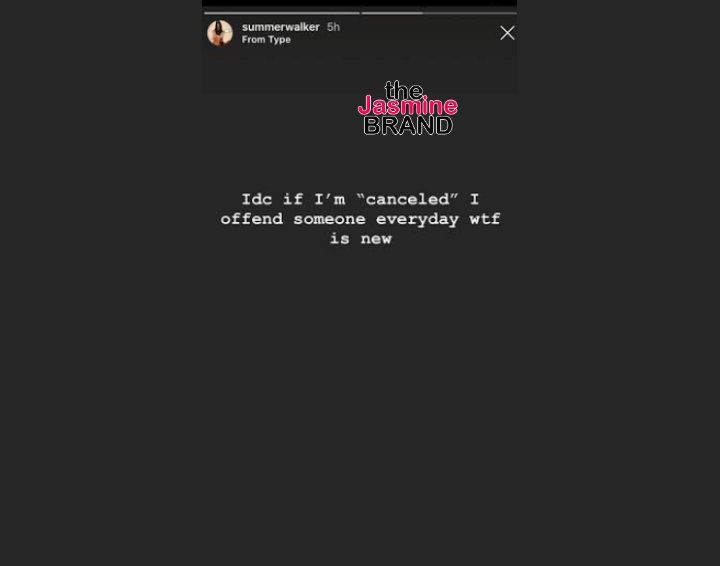 Summer Walker is unapologetic after backlash over HIV comments.

Prior to posting the cryptic message, Summer caught the heat on the Internet after she ranted on Instagram about her stolen laptop. "Who ever stole my laptop off that la flight last night can suck a fat stankin uncercumsized HIV infected d**k," she wrote on Monday.

People quickly called her out for engaging in the HIV stigma, with one writing, "I'm just so disgusted…I'm sure plenty of fans of hers are living with HIV. Just think about the message that it sends to them. This furthers stigmas like believing that people with HIV are 'dirty' & the worst thing to exist."

Another clapped back by mocking her live shows which often received negative reviews, "I've been living with HIV since Summer Walker was 11 years old and longer than her career will last. My immune system is stronger than her live performances."

"Those that are/may be considered fat, uncircumcised or HIV infected would find obvious offense in your tone and use of their plight as a 'punishment' to someone who did wrong to you," read another comment. "Your post is complete trash."

Someone else blasted others who defended the star, "I know i'm late to comment on summer walker's HIV comment, but i'm most disgusted by some of my follower's remarks of 'focusing on the negative, not the positive.' there's nothing positive in shaming folks living with HIV. Period!"