Joining the two actors sharing words of condolences for the death of the 103-year-old icon are actor William Shatner, director Rob Reiner as well as SAG-AFTRA Foundation.

Michael Douglas announced the sad news about his dad in a statement and some of Hollywood's heavyweights have been quick to pay their respects to the 103-year-old "Spartacus" star.

DeVito called him "the inspirational Scalawag", adding, "Great hanging with you man," while Takei tweeted: "An Academy Award winning actor and recipient of the Presidential Medal of Freedom, Douglas was a champion for many just causes and lived a long and storied life. He was adored and beloved, and he shall be missed."

His "Star Trek" castmate William Shatner added: "Condolences to the family of Kirk Douglas. What an incredible icon he was in this industry!"

Director Rob Reiner also poured out his thoughts on social media, stating: "KIrk Douglas will always be an icon in the pantheon of Hollywood... My love goes out to my friend Michael and the whole family." 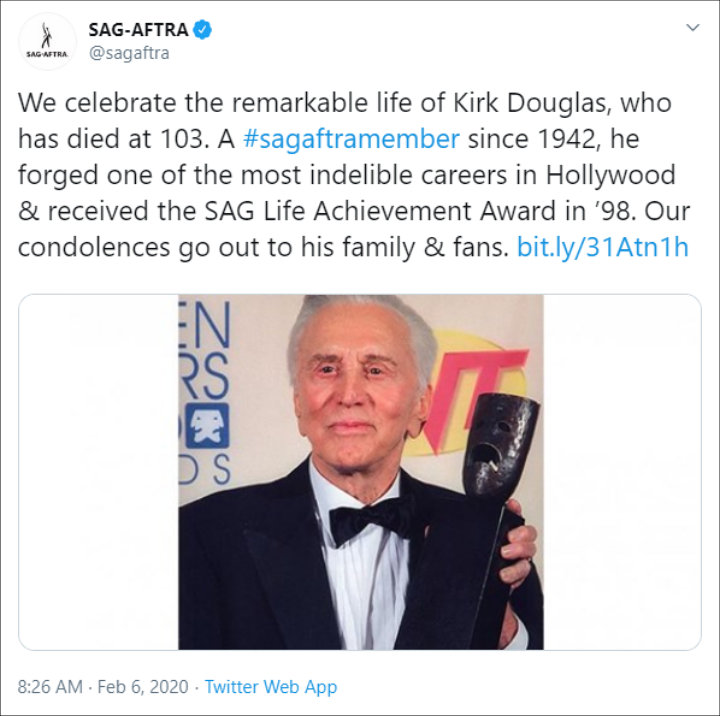 Meanwhile, a SAG-AFTRA Foundation spokesman has released an official statement, which reads: "We remember Hollywood legend and @sagaftra member Kirk Douglas. With over 92 acting credits to his name from Spartacus to 20,000 Leagues Under the Sea, he leaves behind a legacy of classic films and roles. Our condolences to his friends and family."

Petition to Have Danny DeVito as the New Wolverine Gets Over 25,000 Signatures