The former Cleveland Cavaliers player takes to his Twitter to reveal the interaction he has with his wife Vanity when he gets caught starring at the screen too hard.

AceShowbiz - Shakira and Jennifer Lopez's Super Bowl LIV Halftime Show was definitely a sexy one, so much that it might cause troubles in other people's relationships. Kendrick Perkins was almost got into trouble with his wife Vanity Alpough because he couldn't help thirsting over the Latin superstars while watching the set.

Kendrick shared with his Twitter followers the interaction he had with his wife during the halftime performance. In the Sunday, February 2 tweet, Kendrick recalled, "Wifey: (with a side eye) Why are you watching the halftime show so hard." Trying to get away with the situation, the NBA analyst lied to her by saying, "Oh, I was seeing if Ja Rule was gonna come on as her guest."

For your information, Ja Rule was trolled during the halftime show because J. Lo decided not to invite him on stage despite collaborating on one of her classics, "I'm Real".

Many found his post funny, including LeBron James who left a shocked emoji and a bunch of laughing-crying emojis. Kendrick replied to his post simply with the same crying-laughing emoji and a fist hand sign emoticon. Hilariously enough, this prompted people to jokingly speculate that LeBron also faced the same problem as Kendrick. 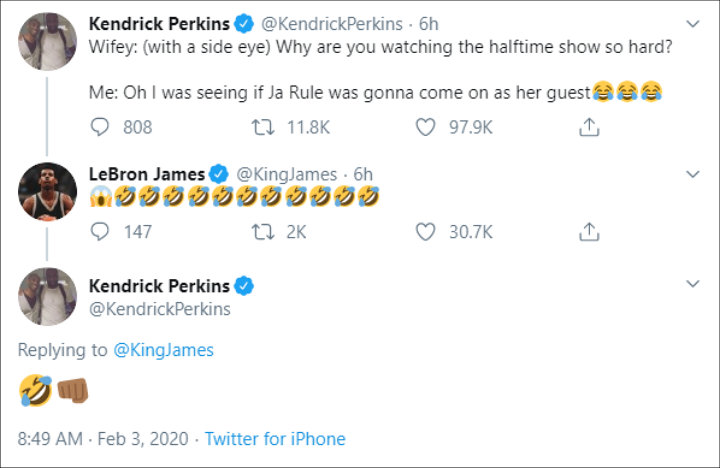 Kendrick Perkins shared a story in which he almost got into troubles with his wife.

"Bron laughing because he almost got caught too lol," one commented. "LeBron when Savannah asked the same question," another wrote along with a GIF of the L.A. Lakers star smiling. Someone else jokingly predicted that LeBron would be "sleeping on the couch tn too."

During their joint halftime performance, Shakira delivered a medley of her hits that included "She Wolf", "Hips Don't Lie" and "Whenever Wherever". She also covered Cardi B's "I Like It" with Bad Bunny. Meanwhile, J. Lo treated both the audience and viewers at home with performances of "On the Floor" and "Get Right" among others. She additionally brought her daughter Emme to help her perform "Let's Get Loud".

'The Masked Singer' Season 3 Premiere: Lil Wayne Is Revealed as the Robot