Lupita Nyong'o Accused of Being Rude to Fans, Overheard Complaining About Them

According to one Twitter user, the Kenyan-Mexican actress rolled her eyes after posing for a picture with the user at an early release party for 'Black Panther'.

AceShowbiz - Lupita Nyong'o has always been known as a cheerful girl. However, some fans who have gotten the chance to meet her in real life might not think the same. The Kenyan-Mexican star has recently been accused of rude behavior to fans.

People have been going around on Twitter to share their awkward and interesting interaction with celebrities, and one person detailed his/her not-so-nice experience with Lupita. Recalling the time when s/he attended an early release party for "Black Panther", the user explained, "I was the 4 person to greet Lupita and tell her how much I appreciate her and how amazing she is. She didn't say anything back. After posing for a pic, she rolled her eyes."

Furthermore, the user claimed s/he overheard Lupita complaining about her fans. The "Us" star allegedly said that she "didn't want to be there and that she didn't care to take pictures. Rolling her eyes, sighing." The person added, "She seemed so miserable at the even. This was the day before the nationwide release so I was like why?? woulda preferred her to not come and just relax at home." 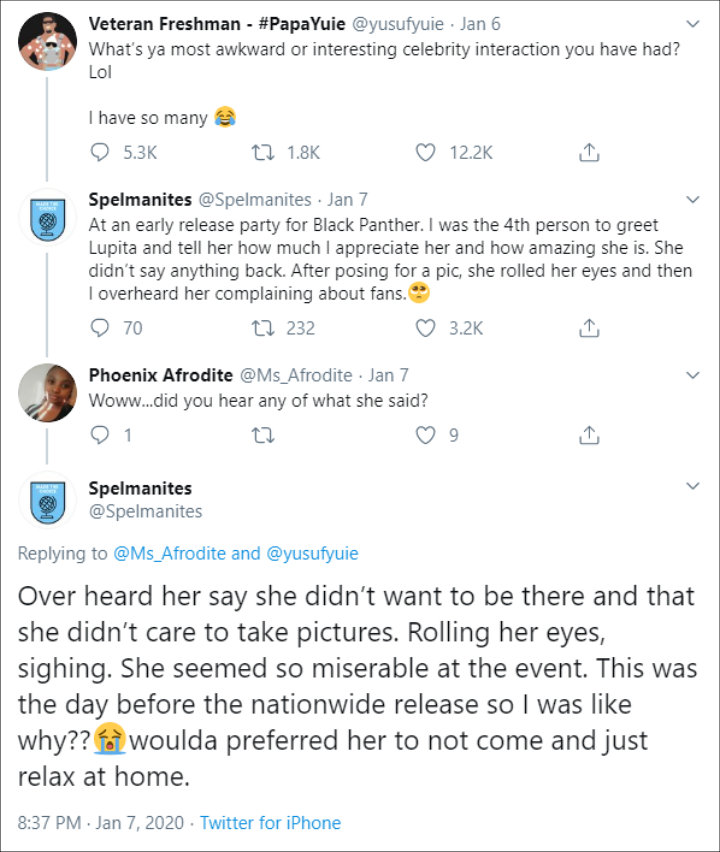 Lupita Nyong'o was accused of being rude to fans.

This prompted other users to come out and allege that they experienced similar things. Someone who claimed to be an extra in "Black Panther" claimed that Lupita "was hella rude on set," while one other shared, "My friend was invited to a broadway play that starred Lupita & the actress who invited my friend. My friend went back stage and everyone left from the same back door. Lupita was apparently very rude to the fans who were back there waiting on the cast."

Meanwhile, another tried "not to think anything of it" when Lupita was being rude to her. "I figured it could've just been an off night," the user said. "She posed for pictures with some, but seemed like she wanted to be anywhere but there."

Lupita has yet to respond to this.