AceShowbiz - Tank took a dig at Charlamagne tha God on Instagram. The 43-year-old R&B singer mockingly reminded the "Breakfast Club" radio host about his comment to perform oral sex on Tekashi69 if the 23-year-old rapper also known as 6ix9ine was released from prison.

CThaGod previously said in an interview, "If Tekashi 6ix9ine beats this case, I will suck his d**k and he doesn't even have to ask me." The radio presenter made the comment after Tekashi was arrested in 2018 over his links to the violent Nine Trey Blood gang.

"It doesn't mean he's gay. It means he sucked d**k twice," Tank said a couple months ago. "The art of being gay is being gay. It's a continuous state of being." Charlamagne later commented on Tank's remarks, "If you sucked two penises in your life as a man, you may not be gay, but, at the least, you're bisexual."

"You tried to clown me for having an opinion when the whole time you were committed to the act.. No judgement here.. Just wanna know how you feel after and if you'll need a second time to really process his freedom..," Tank wrote in a new post on Instagram. Adding a string of laugh emojis, he mocked the host, "@cthagod just don't do it twice!" 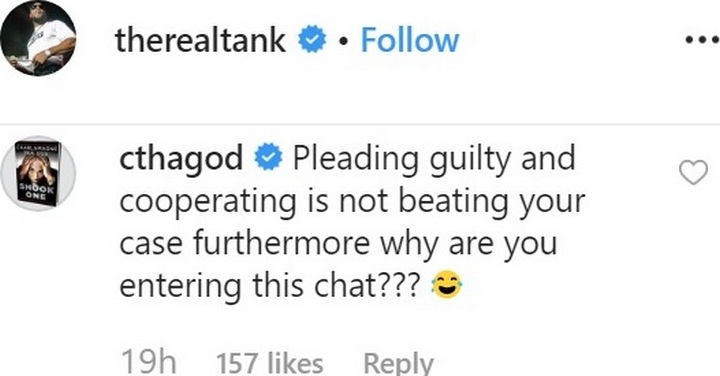 Charlamagne seemed to backpedal on his remarks as he replied, "Pleading guilty and cooperating is not beating your case furthermore why are you entering this chat???" Tank argued, "He's coming home after facing over 10 years! That's called beating the case. I'll exit the chat because i really don't wanna see you follow through with this.."