Confirming news of his involvement in the upcoming installment of the 'Planet of the Apes' film series, the 'Maze Runner' helmer claims his take will be 'honoring what's come before.'

AceShowbiz - A new "Planet of the Apes" movie is officially in the works with Wes Ball on board at the helm. The 39-year-old filmmaker has confirmed that he's attached to develop and direct the upcoming installment of the action, sci-fi film series, after The Hollywood Reporter first reported the news.

Sharing a link to the article about his involvement in the project, Ball tweeted, "I'll say this about Apes... I grew up on the original and absolutely love the previous trilogy." He teased "something special" for the upcoming movie that he promised to be "an awesome chapter to this franchise," writing, "I would only do this if I felt I could offer something special while still honoring what's come before. We have something that’s shaping up to be an awesome chapter to this franchise."

He later added, "It also doesn't hurt I'm friends with all the folks behind these movies. ;)" 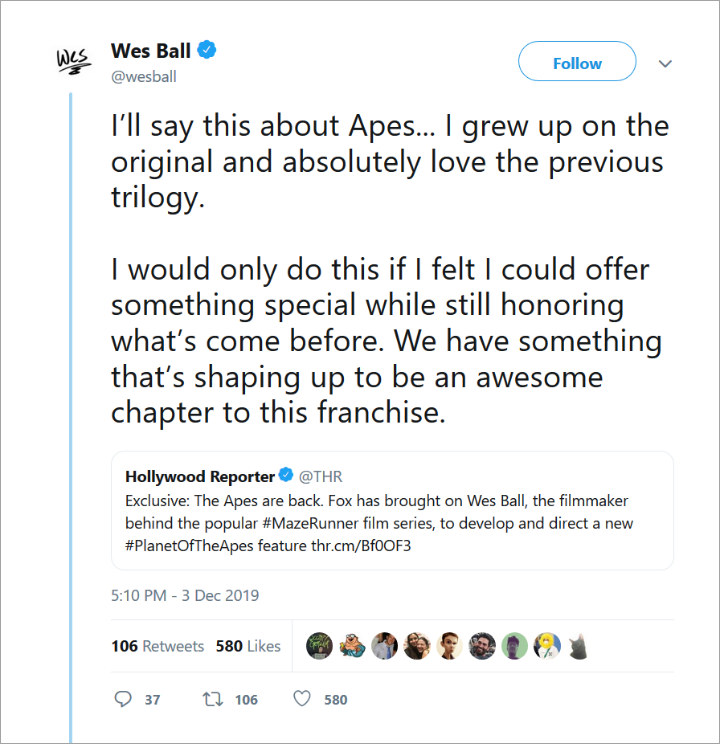 As noted by THR, the untitled Planet of the Apes project marks "one of the first historically significant Fox titles to get the redevelopment treatment since Disney's acquisition of the storied studio." The franchise is based on French author Pierre Boulle's 1963 novel "La Planete des singes (Planet of the Apes or Monkey Planet)".

The first film adaptation came out in 1968. It was directed by Franklin J. Schaffner and became a critical and commercial hit. Four sequels followed the original film from 1970 to 1973. It also spawned two television series in 1974 and 1975.

Since the upcoming project is still in very early stage, it's not clear if the new movie will pick up where the trilogy left off or if it will be a complete remake.

Ball is best known for his works on "The Maze Runner" trilogy. The movie franchise, based on James Dashner's 2009 novel of the same name, grossed almost $1 billion worldwide while being produced on modest budgets. He was tapped to direct an adaptation of Boom! Comics' "Mouse Guard" before the project was shelved by Disney earlier this year.

B. Simone Snuggling Up to DaBaby in New Clip Following Thirsty Posts