In related news, David takes to his Instagram account to share an adorable photo of his and the former 'Teen Mom 2' star's daughter 2-year-old Ensley amid temporary restraining order.

AceShowbiz - Jenelle Evans has been sharing with her online devotees that she's now in a better place after filing for divorce from husband David Eason. The former "Teen Mom 2" star also mends her relationship with ex Nathan Griffith, with whom she shares son Kaiser together, prompting fans to think that they are getting back together. Now, Jenelle puts the rumors to bed once and for all.

Taking to her Twitter account on Monday, December 2, Jenelle addressed the rumors of her dating Nathan after she was rumored to be cozying up to him. "Y'all need to chill. I'm not dating anyone," so she wrote on the blue bird app. 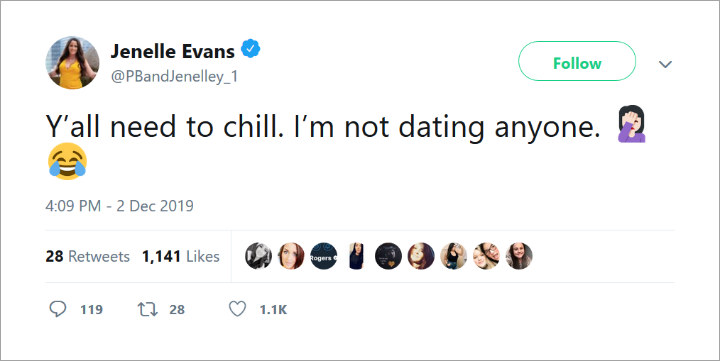 Fans sent her support for it, with one replying, "Probably a good thing. Take a solid year or 2 to focus on yourself and your kids. Only way things are gonna get better." Another fan added, "Even if you are ..its your business. Ignore the haters and love those kiddos AND yourself."

"You have your family to focus on. That's not a relationship, that's a commitment. You're doing a great job Jenelle," someone else said. However, one person trolled the MTV star by writing, "With your track record, you almost skip dating and go directly to unhappily married."

In related news, David recently shared an adorable photo of his and Jenelle's daughter Ensley on his Instagram account, though he is actually not allowed to talk about Jenelle on social media per the restraining order. "The most precious sweet girl ever," so he wrote in the caption.

He appeared to be missing his daughter so much as he expressed it in another post. "Missing my precious baby so much," he captioned another picture of Ensley.

After filing for divorce from David, Jenelle was granted a temporary restraining order against her estranged husband. E! News stated that the MTV personality documented 11 incidents of David's alleged abuse and says she is concerned for her and her children's safety.

It is further stated that the temporary order of protection is issued on behalf of Jenelle and her three kids, 10-year-old Jace Evans, 5-year-old Kaiser Griffith and 2-year-old Ensley.

Jenelle Evans Has 'Anxiety' Every Day After Fibromyalgia Diagnosis