The 32-year-old hairdresser, who identifies himself as non-binary, is the first solo non-female star to be featured on the cover of Cosmopolitan U.K. in 35 years since Boy George.

AceShowbiz - Jonathan Van Ness is making history. The TV personality best known as the grooming expert on "Queer Eye" has crossed the gender barrier as he landed on the cover of Cosmopolitan U.K. for its January 2020 edition.

Rocking a peach tulle gown from Christian Siriano and a pair of Nike Cortez sneakers, the 32-year-old fronted the magazine with a simple headline that read, "Yep. We did it. You're totally welcome". With that, he became the first non-female star to be featured on the cover in 35 years. The last male celebrity making the cover was Boy George in 1984.

Jonathan himself took to Twitter on Monday, December 2, to share the feat. "First non female cover star in 35 years," the hairdresser, who identified himself as a "non-binary," enthused. "@CosmopolitanUK showing more variations of beauty for young LGBTQ+ people YAS QUEEN." 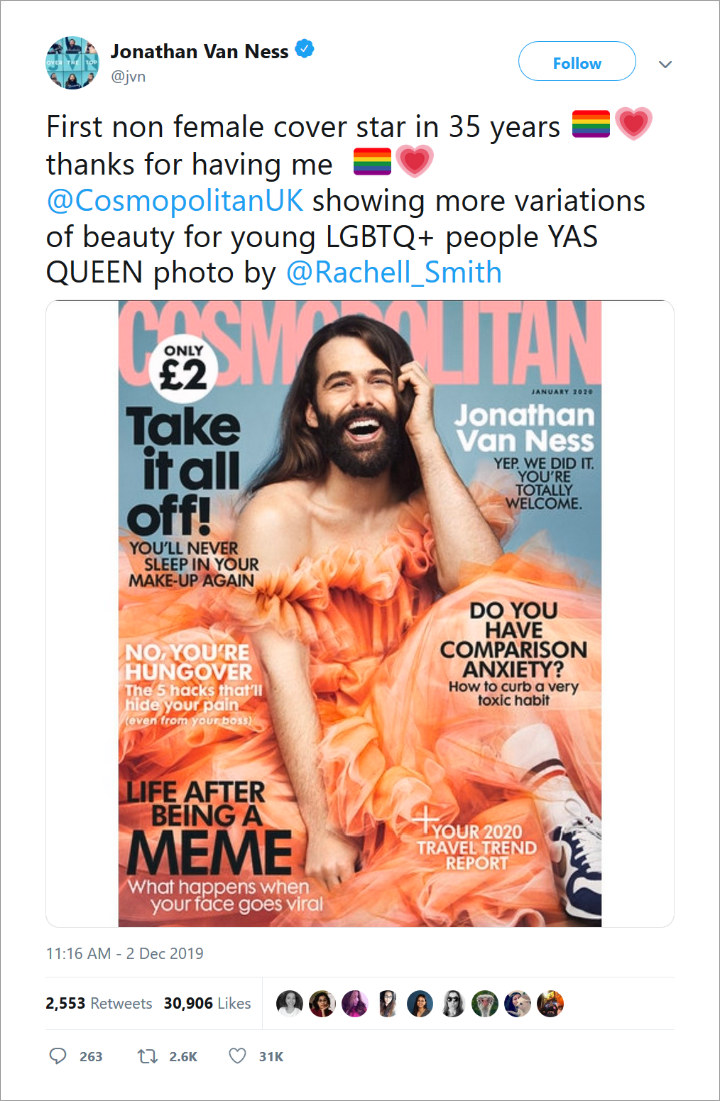 Jonathan Van Ness took to Twitter to share the cover of Cosmopolitan U.K's latest edition, which featured him.
Editors' Pick

In the accompanying interview with the magazine, Jonathan opened up about living with HIV. "This is only the beginning. I'm quickly realizing that there is still so much misunderstanding, so much sensationalizing of living with HIV," he explained. "The stigma and the difficulty around the process of getting treatment is creating that. My work has only really just begun."

The "Gay of Thrones" star additionally addressed his past controversial comments about former president Ronald Reagan's approach to HIV/AIDS which surfaced after he came forward with his diagnosis in his "Over the Top" memoir. "Diane von Furstenberg says, 'Knowledge sometimes is not facts, it's context,' and that's true," he began.

"Because if you only knew that one minute of that one video that you saw of me? I'd hate me too," he elaborated. "I really would. If I saw the headlines of 'Queer Eye star reveals devastating HIV diagnosis' and then, two days later, you see this one-minute video of me cracking jokes about Ronald Reagan's treatment of people living with HIV, I would hate me too."

"But they also don't understand that I'm someone who is living with HIV; that that was the first press tour I'd ever done; that I'm also a comedian who makes jokes out of stuff because if I didn't make jokes about it, I wouldn't be able to get out of bed in the morning. I have always used comedy as a way to soothe myself and move forward."

This 26-Year-Old Actor May Replace Henry Cavill as Superman