The husband of Alicia Keys hits back at one of his Instagram followers who wrote a very rude comment about his 4-year-old son Genesis' rainbow-colored nails.

AceShowbiz - Swizz Beatz is supportive of his children expressing their creativity in any way they want. So the father of five refused to keep silent when one of his male Instagram followers mocked him and his wife Alicia Keys for letting their son Genesis paint his nails with rainbow color.

"You Swizz Cheese for letting your wife paint ya son nails like tekashi hair colors," the fan left a very rude comment on Swizz's page, comparing the vibrant nails to 6ix9ine's hair. The troll added, "We don't do that s**t in the Bronx n***a I thought you was from th Bronx that's some Hollywood s**t."

Swizz Beatz hits back at troll

The 41-year-old music producer apparently clicked on the hater's page, seemingly curious about what kind of person he was. "That's why you got that hot pink outfit on huh!" he mocked the troll back while referring to one of the troll's Instagram posts. "My 4yr prob harder than you BX!"

A few days ago, Alicia told her online devotees in an Instagram video on her own page that her 4-year-old son was initially excited to get colorful nails when she took him to a nail salon but he later second guessed his decision for fear of being bullied.

"Can you believe this? Four years old. He's four and he already understands the concept that someone's gonna judge him because he chose rainbow color on his nails," she said, adding that she encouraged the little boy to stick to his original decision.

"It just got me to thinking how completely judged we are all the time. The way I see it, there is masculine and feminine energies inside of us all and that's period. That's how it is. And it gets concerning to me that we can't just explore these different sides of ourselves." 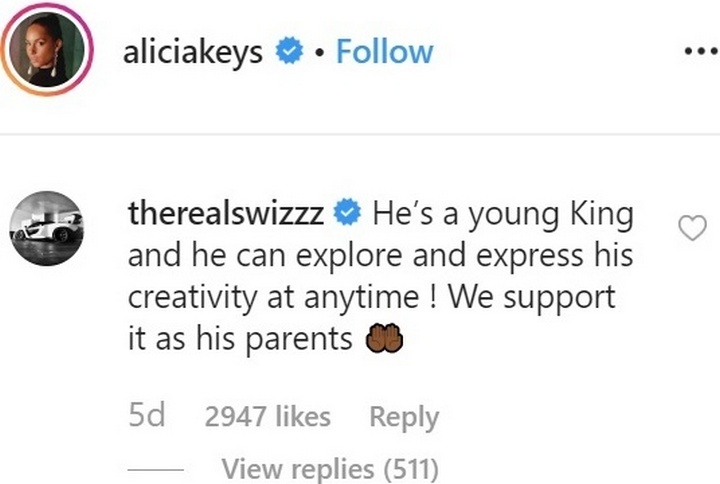 Swizz Beatz was among the people who left supportive comments on her post. "He's a young King and he can explore and express his creativity at anytime!" he wrote. "We support it as his parents."

Swizz Beatz's Baby Mama Accuses Him of Being Abusive and Racist