The 'Lose You to Love Me' singer says she is 'extremely angry' at the two music moguls for robbing and crushing 'one of our best song writers (sic) of our time.'

AceShowbiz - Selena Gomez called out Scooter Braun and Big Machine Records' founder Scott Borchetta in defense of her beastie's Taylor Swift. Selena said the two men "robbed and crushed one of our best song writers (sic) of our time an opportunity to celebrate all of her music with her fans and the world."

"My heart is so heavy right now," she wrote on Instagram. "It makes me sick and extremely angry. (I don't mind if there may be retaliation) this is my opinion. It's greed, manipulation and power. There is no heart or thought of anyone else's. No respect for the words my friend has written since she was a 14 year old in her bedroom."

"I have known Taylor for 13 years," Selena continued. "She is the most dedicated, fearless, fiesty (sic), strongest woman I've ever known. People can say b**** but what I'm saying to you is that's called a woman with true identity and strength who takes no sh**."

“I listened to Fearless before it came out and I just remember us jumping on a bed and she was just sparkling. So proud of her diary being read by the whole world. Nervous of people not liking it … but that became one of the biggest records - an album that saved so many young woman who felt alone. Have a broken heart. Who were healing. Those who felt invisible. Gave a voice to those who didn't know that they had one all along. Believing in dreams again."

"I continued to see how she has constantly challenged her self (sic) to create a beautiful life that belong to just her. So I can tell you first hand the MOST important thing to Taylor is her family, love, her fans, and her MUSIC. I really hope there is a change of heart over this unfortunate situation."

She concluded, "Seeing my best friend (or any of my friends) be constantly pulled down is the worst feeling. Taylor fights. She will never stop fighting. People grow from choices. Some will stay exactly the same. I just want a change of heart. I love you." 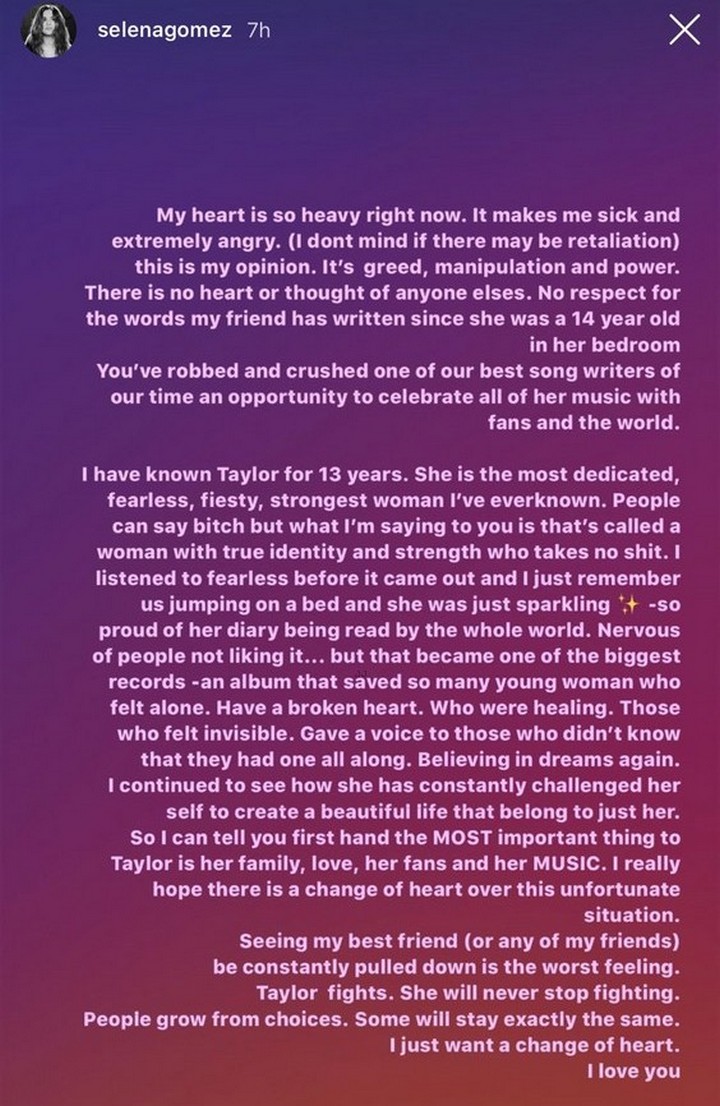 Taylor Swift aired out her battle with Scooter Braun and Scott Borchetta on Instagram, claiming that they barred her from singing her old songs. The two music moguls, however, denied it and instead accused the singer of "owing millions of dollars and multiple assets to our company." They also said Taylor rejected "the invitations to speak" with them.