Tamar Braxton Is Done With Homophobic Accusation: 'It's Ridiculous'

In one of her posts on Twitter, the 42-year-old 'Braxton Family Values' star demands that people will 'STOP with that BS!!!' and urge them to 'find something else!!! PERIODT!!'

AceShowbiz - Tamar Braxton still has to face the aftermath of her controversial post about gay men. The singer/reality star previously apologized for the eyebrows-raising remarks, though that didn't seem to be enough to make people move on from the topic.

On Wednesday, November 13, Tamar fiercely responded to a post which claimed that she "is forced to apologize after being accused of making these anti-gay comments." Tamar wrote, "This is what we are NOT going to do. I wasn't FORCED to apologize for ANYTHING!!"

She went on saying, "Let's state FACTS!! I have OPENLY been apart of the lgbt community since the 4th grade!My ENTIRE staff is as well!!And I will continue 2support. But I will also make FACTUAL statements about MY LIfE." 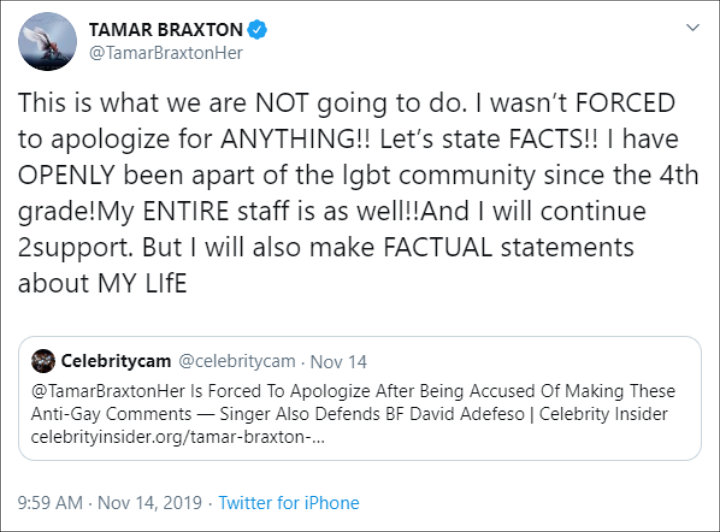 Tamar Braxton once again clarified homophobic accusations against her.

In another post, the "Braxton Family Values" star demanded people to "STOP with that BS!!! Find something else!!! PERIODT!!" She also added, "It's Ridiculous to even accuse me of offending my friends, my staff and my close love ones!! I can speak out about my life!!! it is completely OFFENSIVE to me and the life I truly Live!! This stops NOW!!"

She asked people to stop 'with that BS.'

The 42-year-old star was accused of being homophobic after she claimed that man must have been gay if he didn't touch his girlfriend for three days. "The truth is ladies that these dudes out here really be gay. It ain't enough money, beauty, hair, babies in the world to keep them!! They want d***!! Periodt!! It's nothing wrong with you, but they will find EVERY reason in the world to make u not good enough!!" she said.

"If he lays with you for 3, 4, 10 days and he don't touch u, it's NOT YOU!! HE WANT A MAN!! And that's on my momma," she continued in her bizarre post which she called a "public service announcement, "It's time someone says something!!!"

She then clarified on Twitter she wasn't talking about her and boyfriend David Adefeso. "I was talking about me but not me and David," she explained before adding, "I've been through a lot. This is why I stay on my fake page [laugh emoji]." On Instagram Stories, she beat herself up for posting the rant. "We all say stupid s**t," so she wrote.

Tamar Braxton Is Done With Homophobic Accusation: 'It's Ridiculous'