This arrives after the 'Cheers' actor blasted the 'Real Housewives of Beverly Hills' star by calling her 'pathetic' for asking for a divorce on the day of his mother's funeral years ago.

AceShowbiz - "The Real Housewives of Beverly Hills" star Camille Grammer is setting the records straight. The TV star is firing back at her ex-husband Kelsey Grammer after the latter claimed that she asked for a divorce on the day of his mother's funeral.

Taking it to Twitter, Camille made her response to the claims known. "This is not true," the 51-year-old said in a statement. "My parents were with us in the Hamptons when we received the news about his moms passing. We consoled him and flew back to LA to make arrangements for her funeral."

"It's unfortunate that he is rewriting history," she continued saying. 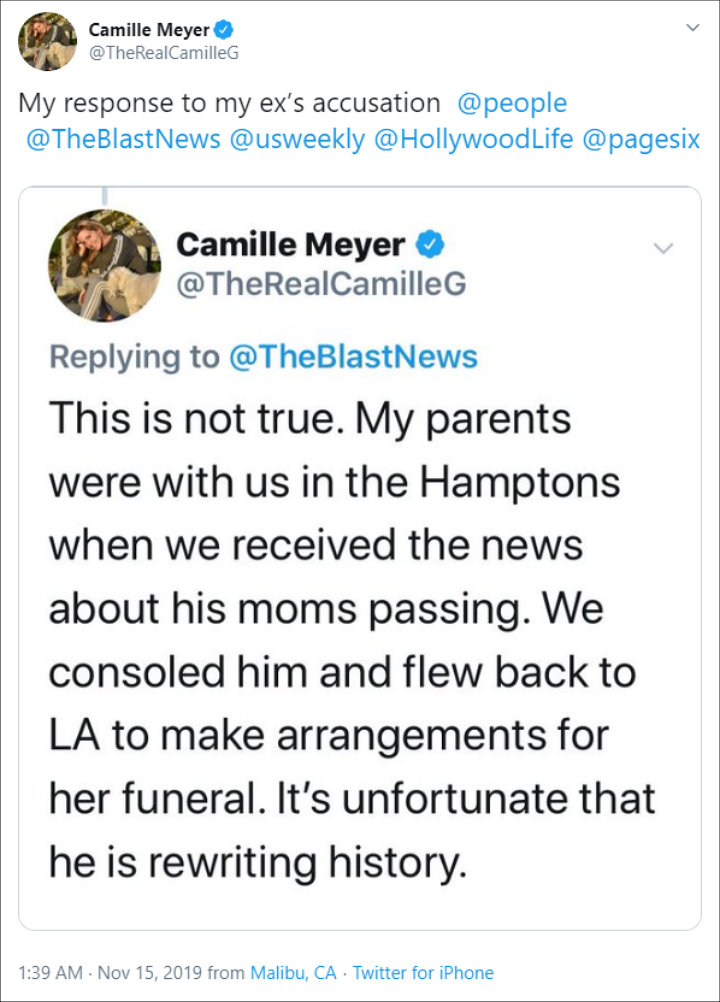 Kelsey previously dissed the Bravo personality during his appearance on "In Depth with Graham Besinger". "Her life is spent talking about me and I just think it's sort of pathetic," Kelsey, who is known for his role as Dr. Frasier Crane on the long running series "Cheers" and spin-off "Frasier", shared.

"A month after I had a heart attack, my mother died, 12 years ago now. The day of my mother's funeral, my third wife basically had an explosion about something…," he went on saying. "And she started telling me, 'I'm out of this, I'm out of here. I want a divorce, blah, blah blah,' which, we'd had the same conversation for eight years, and it was tiresome."

"I realized at that moment that I was done with her, that I was not going to end up in this relationship for much longer," Kelsey continued. "And somewhere under a year [later], I was done."

Camille and Kelsey married in 1997 before divorcing in 2011. The pair share two children together, Mason Olivia (18) and Jude Gordon (15). Camille is now married to lawyer David C. Meyer, to whom she tied the knot in October 20, 2018 in Hawaii. Meanwhile, Kelsey married his fourth wife Katye Walsh in 2011.