While refuting his 'No Small Affair' co-star's account about his first sexual partner, the former 'Two and a Half Men' star insists he has 'nothing but affection for her.'

AceShowbiz - Former "Two and a Half Men" star Jon Cryer has slammed Demi Moore's claims she took his virginity in her new memoir.

The actor was shocked to get a namecheck in "Inside Out", which dropped on Tuesday, September 24, but he insists former flame Demi's assumption that she was his first sexual partner is way off.

"Well, the good thing about this is she doesn't have to feel bad about it anymore, because while I'm sure she was totally justified making that assumption based on my my (sic) skill level (and the stunned look on my face at the time), I had actually lost my virginity in high school," Jon tweets. 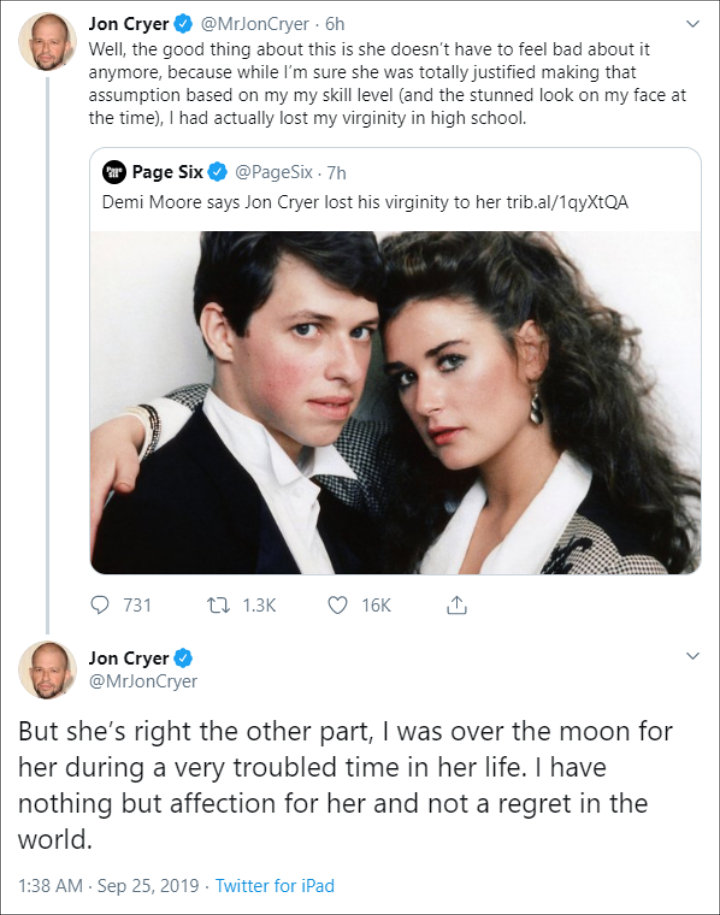 In her book, Moore recalls hooking up with her "No Small Affair" co-star in the early 1980s.

"Jon fell for me in real life, too, and lost his virginity to me while we were making that movie," Moore wrote. "It pains me to think of how callous I was with his feelings - that I stole what could have been such an important and beautiful moment from him."

But Cryer insists he has no regrets about romancing Demi, adding, "I have nothing but affection for her and not a regret in the world."

Ironically, she went on to marry Cryer's "Two and a Half Men" co-star Ashton Kutcher.

Jordyn Woods Gets Wild, Parties With Lori Harvey to Celebrate Her 22nd Birthday

Jenna Dewan 'Beyond Overjoyed' for Her Second Pregnancy