The former 'Two and a Half Men' star, who lost his wedding ring during a walk in the rain, recalls discovering an organization called The Ring Finders after an unsuccessful search by himself.

AceShowbiz - Former "Two and a Half Men" star Jon Cryer has thanked a stranger for helping him find his lost wedding ring.

The actor was walking in the rain in Vancouver, Canada when he suddenly realised his wedding ring was gone and shared his panic in a lengthy Twitter thread on Monday, October 12.

"I looked around trying to see if something was glinting on the pavement. But it was raining and there were only a few lamp posts with working lights. So nothing. I pulled out my phone and turned on my flashlight. Not much, but worth a try," Cryer wrote.

He searched the wet pavement and grass until he had to leave the area and meet friends, and after an unsuccessful search the next day, Cryer put the ring in the lost-and-found section on Craigslist and discovered an organisation called The Ring Finders.

"I'm contacted by Chris. He tells me it could be very tough," Jon explained. "When you're dealing with a paved walkway that is well traveled it's likely somebody already found it. But he can come out the next day with his metal detector (sic). Next day we meet up and he's already been to location to check it out. He is not optimistic."

Yet in a miraculous turn of events, Chris bent down over a patch of grass and located the item.

Cryer adds, "He leans down and grips a wad of grass from the ground. As he pulls a few stray blades from the clump he asks: 'Is this what your ring looks like?' He wipes the clump, revealing a glint of silver. I'm stunned. Chris' face lights up. He's taking video of the reveal. He loves this s**t. I stammer out, 'Are you serious?!?' I look closer." 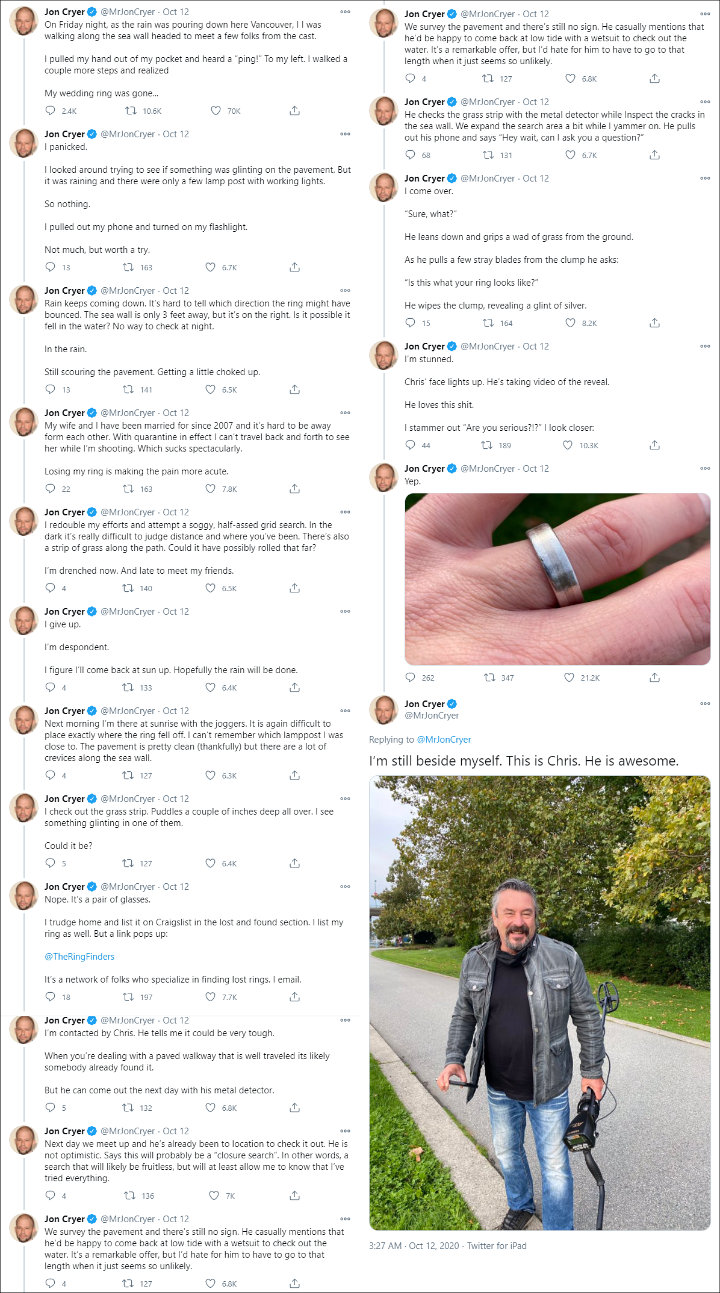 Jon Cryer shared the story of how a stranger helped him find his lost wedding ring.

The jaw-dropping experience led his pals Ben Stiller and Nick Kroll to joke that they are working on a TV adaptation of the story.

Stiller tweeted, "This has already been optioned as a premium limited series by @nickkroll. I'm looking into the musical rights." 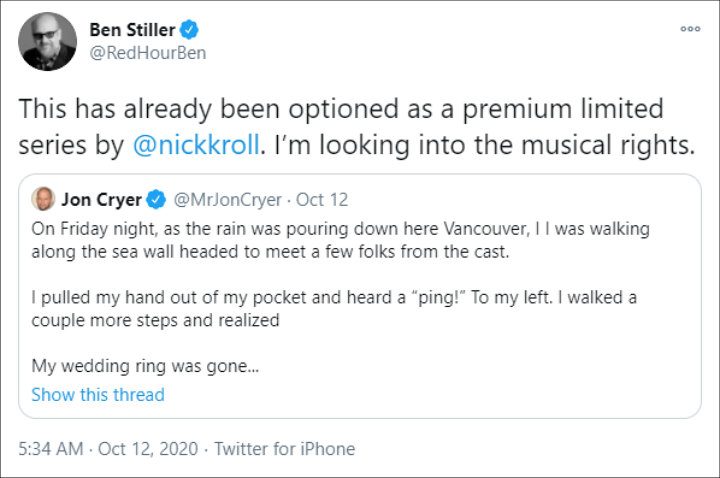 Ben Stiller reacted to Jon Cryer's story of how he found his missing wedding ring.

Cryer has been married to TV host Lisa Joyner since 2007.

Video: Kourtney Kardashian Gets Confronted by a Mob of Angry Anti-Fur Protesters