The never-before-seen stills, one of which may offer a glimpse of Harley Quinn's hyenas, are reportedly taken from an upcoming teaser trailer of the movie.

AceShowbiz - As fans are waiting for a trailer of "Birds of Prey (And the Fantabulous Emancipation of One Harley Quinn)", new images from the movie have leaked online. Having been reposted on Twitter by various accounts, the photos feature Harley Quinn (Margot Robbie), Black Mask (Ewan McGregor), Huntress (Mary Elizabeth Winstead), Black Canary (Jurnee Smollett-Bell) and Renee Montoya (Rosie Perez).

While those aforementioned characters have been previously revealed in a teaser, the leaked photos show some characters like Huntress and Black Canary in action. There's also a shot of Harley facing off someone who is wielding a machete, and another photo is believed to feature a glimpse of her hyenas, as she's seen riding a car and enjoying a pastry with some fury companions sitting behind her.

The leaked images are reportedly taken from an upcoming "Birds of Prey" teaser trailer. The 40-second spot will allegedly be released before "It Chapter Two" in theaters when the horror movie arrives next week. 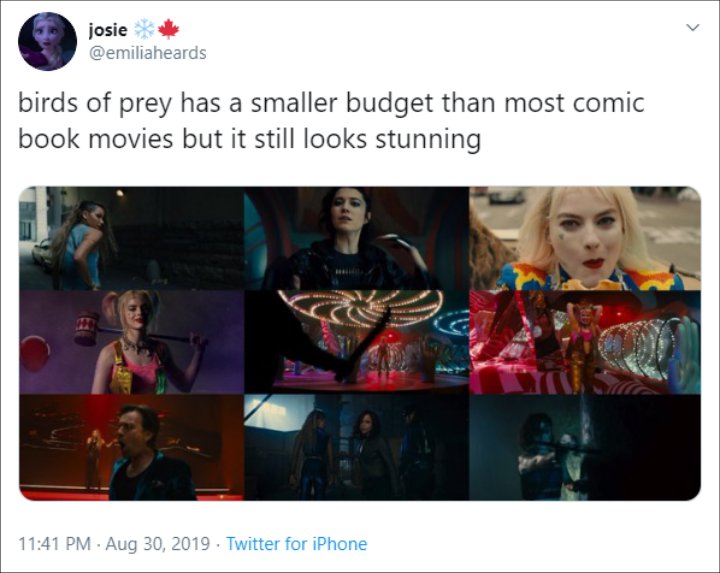 Following the leak of the images, fans have been raving about the movie, with some saying that their doubt about "Birds of Prey" has now been cast away. "All my doubts about #BirdsOfPrey have gone because it looks awesome! Can't wait for that teaser," one tweeted. Another gushed, "birds of prey has a smaller budget than most comic book movies but it still looks stunning."

Ella Jay Basco stars as Cassandra, while Chris Messina also joins the cast as Victor Zsasz. Cathy Yan is directing the pic, with the script provided by Christina Hodson. The dark-edged crime film is scheduled for a February 7, 2020 release in the United States.