His brother and fellow YouTube star Logan Paul doubts that the person on the photos is really his brother, while Tana's ex-girlfriend Bella Thorne takes to Twitter to slam Jake over the rumors.

AceShowbiz - It's only been 3 weeks since Tana Mongeau and Jaul Paul held their wedding and it seems like there's already trouble in paradise. Speculations that the YouTuber couple may end their brief relationship arrive after Jake was pictured having lunch with his ex-girlfriend Erika Costell.

A guy, who was said to Jake, was photographed grabbing lunch at Panera with Erika in late over the weekend. The guy was seen sporting a white T-shirt and a yellow cap during the outing. Meanwhile, his brunette companion dressed casually in a white top while letting her flock fall down her shoulders. Further fueling the rumors that Jerika had reuninted was the two were reportedly seen at the same party the night before.

After the photos went viral, Tana took to her Twitter account on Sunday to cryptically responded to it. "lmao wtf," she wrote. Additionally, she posted an Instagram Story of herself singing a parody of "Thank U, Next" by Ariana Grande with altered lyrics so that it fit her own topsy-turvy love life.

Tana Mongeau appeared to react to the viral photos.

"Thought I'd end up with Bella [Thorne]/ Yet it wasn't a match/ Wrote some songs about Hunter/ Now I listen and laugh/ Even actually got married/ And for Jake I'm so thankful/ Except when he goes out to lunch with his ex/ And I find out on Twitter," Mongeau sang while laughing.

His brother and fellow YouTube star Logan Paul, meanwhile, doubted that the person on the photos was really his brother. "are we SURE that's Jake... ?" he wrote. As for Jake, he was was relatively quite on social media until he wrote a presumably response to the whole cheating rumors on Tuesday. "wasn't me," so he simply tweeted in the blue bird app. 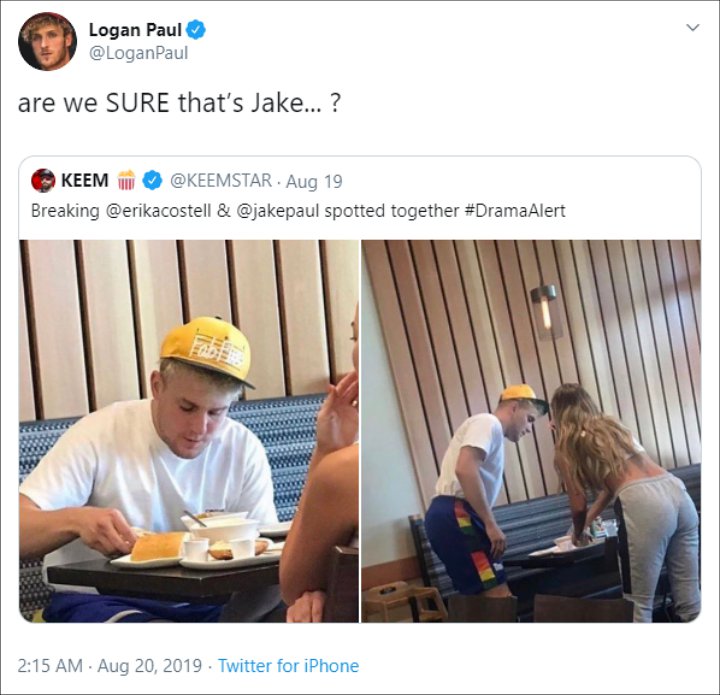 It remains to be seen whether it was really him or not in the snaps, or whether he was cheating on his 3-week wife or not. However, it doesn't stop Bella Thorne from slamming Jake on Twitter. Retweeting a tweet of a fan who said that Jake only used Tana for clout. "While her family is going thru some s**t… not a good look jake," so the "Midnight Sun" star wrote.

Jake and Tana exchanged vows in their $500,000 nuptials in her native Las Vegas. The controversial couple streamed the ceremony for fans who paid to watch the ceremony.

Besides Jake Paul and Tana Mongeau, These Celebrity Couples Are Accused of Faking Relationships