After a month-long detention in Stockholm over an alleged street assault, the 'Wild for the Night' rapper is allowed to head back to the U.S. while awaiting for an August 14 verdict.

AceShowbiz - Drake and Tyler, the Creator are leading the homecoming rap party following A$AP Rocky's release from a Swedish prison on Friday, August 02.

The hip hop star, real name Rakim Mayer, and two associates are heading back to the U.S. after they were released from a month-long detention centre in Stockholm, where they were detained following a street brawl at the end of June.

The trio will learn its fate within the next two weeks.

But, as Rocky and his pals head home, the hip hop community is celebrating, with Drake leading the cheers by posting an image of his rap peer and a series of champagne bottle emojis on Instagram, while Tyler adds: "RAKIM IS COMING HOME!!!!!!!!"

There were also posts from A$AP Ferg and Thelonius Martin, who uploaded Rocky's song "Coming Home" and wrote: "Glad Rocky is Back Home." 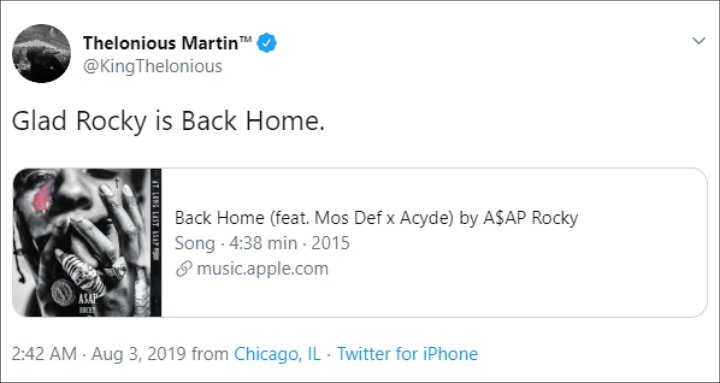 The rap star and the two members of his entourage were caught on camera beating up a 19-year-old and they have been charged with assault causing actual bodily harm. All three pleaded not guilty and Rocky claimed he was acting in self-defence after his bodyguard was attacked.