Facing backlash for a soundbite from the latest episode of 'MTV No Filter: Tana Turns 21', the ex-girlfriend of Bella Thorne claims to be 'a little salty to see it pulled out of context.'

AceShowbiz - YouTube star Tana Mongeau has clapped back at critics who are still convinced her wedding to Internet personality Jake Paul was all just a big publicity stunt.

Her detractors piled on after a soundbite from the latest episode of her reality TV show, "MTV No Filter: Tana Turns 21", in which she describes her nuptials as "something fun and lighthearted that we are obviously doing for fun and for content," was released.

Backlash from fans was swift and now Tana has come out to insist her 28 July ceremony was sincere and not a ratings stunt.

"I understand ppls (people's) frustration with this sound bite from the show & it's the last thing i wanna talk about right now but obviously i just uploaded an 8 minute youtube video on how much i love Jake & am not tryna look like that much of a sociopath hahahahahaha (sic)," she wrote on Twitter on Wednesday. "i filmed those confessionals for the show A LONG TIME AGO! the 'for fun and content' sound bite was from a very long sentence lmao and was a little salty to see it pulled out of context."

Tana claims the segment was manipulated by MTV marketeers to draw people to the next episode and is not reflective of her true, authentic love for 22-year-old Jake.

"I understand though that MTV has their own creatives & that these episodes are airing very late, especially in timing with the wedding," she continued. "i'm not trippin. i know that things have moved so fast, are unconventional, and confusing but i love jake. i truly do, in the weirdest f**king way. every second of this rollercoaster ride has been so fun & crazy."

"i hate that it'll probably always come with owing people some explanation especially with so many things coming out like the show (sic)... but i know that's kinda the life we signed up for." 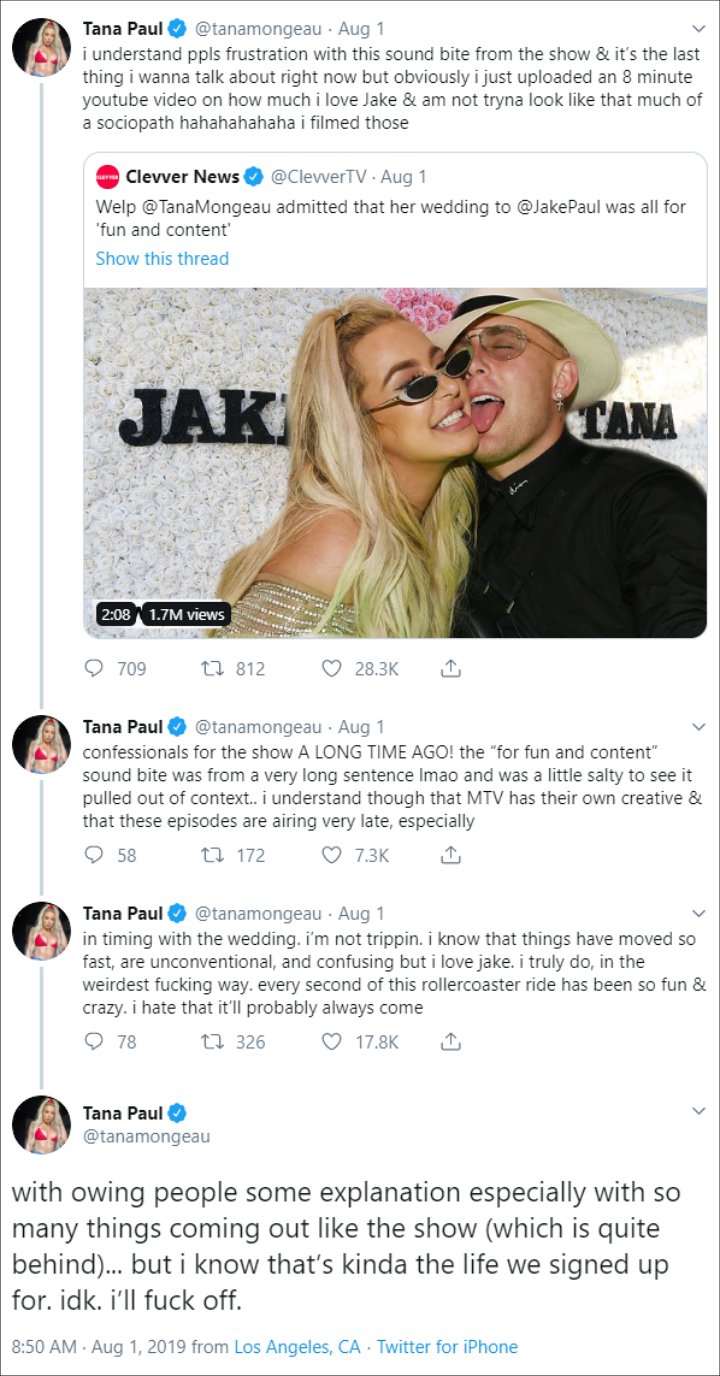 Tana and Jake exchanged vows in her native Las Vegas and streamed the ceremony for fans who paid to watch the nuptials.