The 'Bounce Back' rapper professes his love for his ex-girlfriend after she helped promote his new song 'Single Again' featuring Jhene and Ty Dolla $ign.

AceShowbiz - Big Sean and Jhene Aiko broke up months ago, but they remain friends and supportive of each other. The rapper recently professed his "unconditional" love for his ex after the R&B singer helped promote his new song "Single Again", which features Jhene and Ty Dolla $ign.

Commenting on Jhene's Twitter post, the 31-year-old whose real name is Sean Michael Leonard Anderson wrote, "@JheneAiko I appreciate you supporting me on this one and I want to just say I love you unconditionally." He went on praising the "Bed Peace" songstress, "You amazing, talented, every song we do special to me! People gon say whatever but it is what it is. I could have txt u this I know but I want people to know I appreciate you." 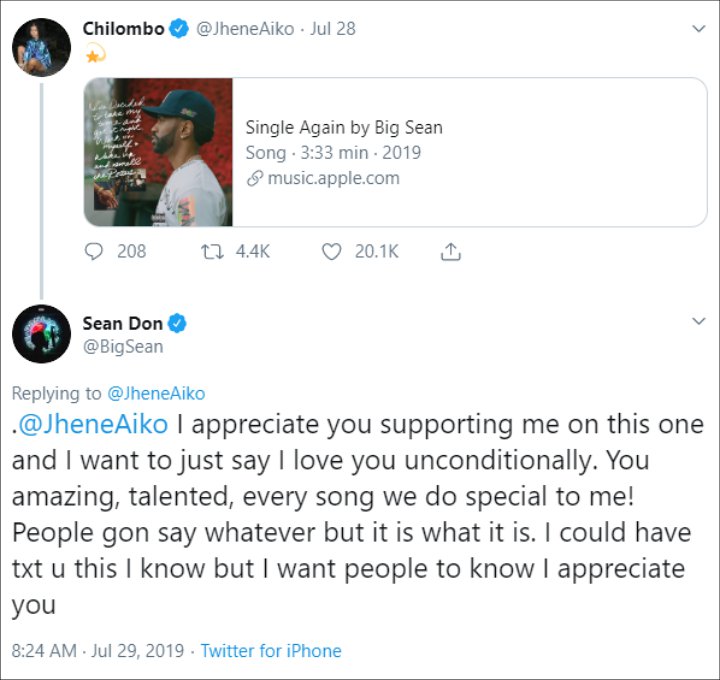 Big Sean declares his love for ex Jhene Aiko months after they split.

Many Twitter users got emotional over Big Sean's love confession and asked them to get back together. "OMFG just get married already!" one responded to the rapper's tweet. Another wrote, "CAN YALL JUST BE TOGETHER."

Big Sean and Jhene started dating in 2016. In November 2018, they were reported to have split after Jhene covered up a tattoo of him. However, it wasn't until March of this year that it was confirmed they're no longer together.

Big Sean's love declaration for his ex comes after he tweeted last week, "In this hot girl summer I'm just tryna find a wife." A Twitter user then responded, blaming him for ruining his relationship with Jhene, "This man out here acting like he didn't have Jhene and fumbled the bag."

However, the "Clique" hitmaker denied it, stating, "She's amazing! I didn't fumble anything but I can see from how things can look from the outside looking in. It's all love though, that's what you don't understand."

Jhene previously also explained after people suspected that her new song "Triggered" was about her doomed relationship with Big Sean. She said that the song was recorded long before it dropped and that she and her ex were on good terms. She described the song as "a moment of exaggerated expression when I was feeling lost and weak. No one is to be blamed or bashed for how I was feeling in that moment."