In a statement about season 6 being the ABC series' final run, Peter Nowalk expresses his gratitude over the chance 'to give all the characters their own killer endings.'

AceShowbiz - Viola Davis' hit legal drama "How to Get Away with Murder" will meet its end with its sixth and final season.

The TV series, which revolves around Davis' law professor character Annalise Keating who becomes entwined in a murder plot with five of her students, is due to return for its previously-announced sixth run on U.S. network ABC this September - and the 15 episodes will be the show's last.

"Deciding to end this series was a brutal decision, but ultimately the story tells you what to do - as it did here," creator Peter Nowalk shares in a statement.

"For me, Annalise Keating's journey has always had a clear ending. Knowing I have 15 episodes left to finish her story, and the chance to give all the characters their own killer endings, is a gift rarely given to a series creator and I'm grateful to ABC and ABC Studios for the opportunity and creative freedom."

"I am so thankful to the brilliant cast, writers and crew for dedicating themselves to the most rewarding experience of my career over the last six years. I also want to thank our fans. The only reason this show exists is because of your loyalty and enthusiasm. I can't wait for you all to see how it ends... Buckle up." 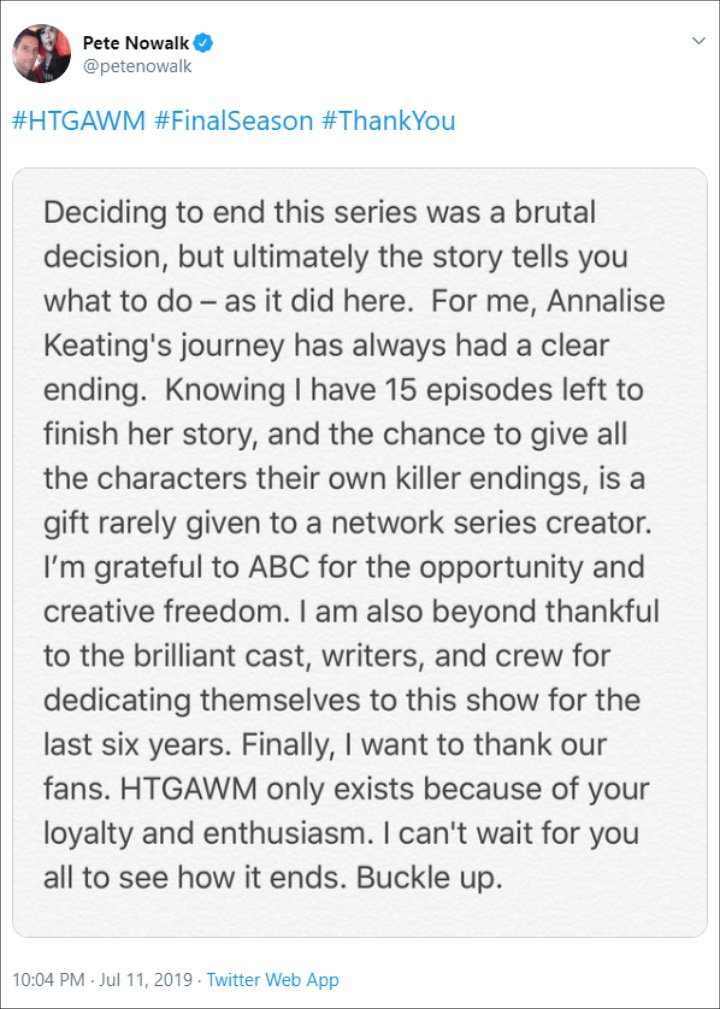 Davis has portrayed Keating on "How to Get Away with Murder" since its premiere in 2014, and she made history in 2015 when she became the first black woman to win the Primetime Emmy Award for Outstanding Lead Actress in a Drama Series.

It's not the only hit ABC series coming to an end - the producers of "Modern Family" previously announced the show will wrap for good after its 11th season, which will also debut later this year.

Victoria Beckham Credits Her Mom for Inciting Her Passion in Fashion