While the 'We Belong Together' hitmaker is left shaken by the natural disaster, fellow singer Robin Thicke who is away for Independence Day holiday hopes everyone back home is safe.

AceShowbiz - New Yorker Mariah Carey has admitted she was unsure of what to do when a huge earthquake erupted in southern California on Thursday (July 04).

The 49-year-old singer was in Los Angeles for the Independence Day holiday, and was left shaken in more ways than one when the quake began.

Director Ava DuVernay was among the famous names responding to the natural disaster on Twitter, and wrote, "Been living in Los Angeles all my life. That was the longest earthquake I've ever experienced. Not jerky. Smooth and rolling. But it was loooong. It was so long I thought for the first time ever 'Is this the big one?' Damn. Respect Mother Nature. She's the boss."

In response to Ava's tweet, Mariah replied, "I was like... Do I roll out of bed and get to the doorway? I'm from New York, I can't handle this!" 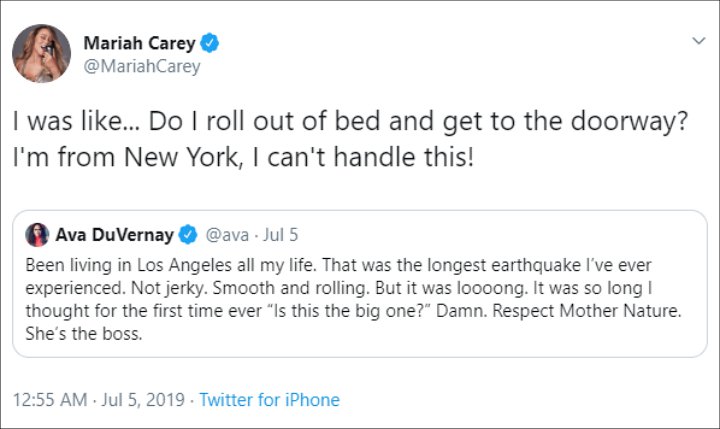 The quake, which measured 6.4 on the Richter scale, was the strongest for the past 20 years.

"Blurred Lines" star Robin Thicke was away from Los Angeles for Independence Day, but responded on Twitter to check his fans were okay, writing, "Away with this beauty for the holiday. Hope everyone back home in LA is safe from the earthquake. Have a good 4th everyone!"

Meanwhile, rapper Tyler, the Creator kept his response short and sweet, sharing a line of exclamation points on Twitter.

Victoria Beckham on Saying No to Spice Girls Reunion: It Took a Lot of Courage