The strong tremors were initially thought to have measured 6.6 on the Richter scale, before being downgraded to a magnitude of 6.4, but it was enough to send shockwaves through Hollywood on America's birthday, and a number of celebrities flocked to social media to comment on the scary moment.

"Been living in Los Angeles all my life," tweeted director DuVernay. "That was the longest earthquake I've ever experienced. Not jerky. Smooth and rolling. But it was loooong (sic). It was so long I thought for the first time ever 'Is this the big one?' D**n. Respect Mother Nature. She's the boss."

Halle reposted DuVernay's message and remarked, "That was crazy!!", as Mariah also commented, "I was like... Do I roll out of bed and get to the doorway? I'm from New York, I can't handle this!" 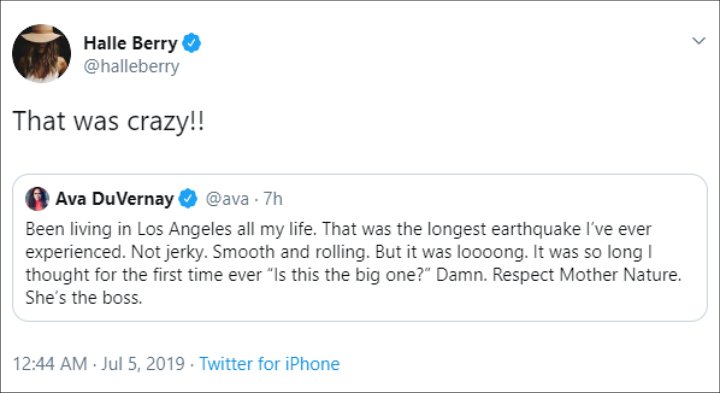 La Toya was just as terrified, fearing her house would collapse, "This was absolutely horrible! #earthquakes," she wrote. "I thought the ceiling was caving in. All the chandeliers were swinging. And kept hearing tons of crackling! 6.4 on this #4thofJuly2019 I'm still shaking it was a long one. #rollercoasters." 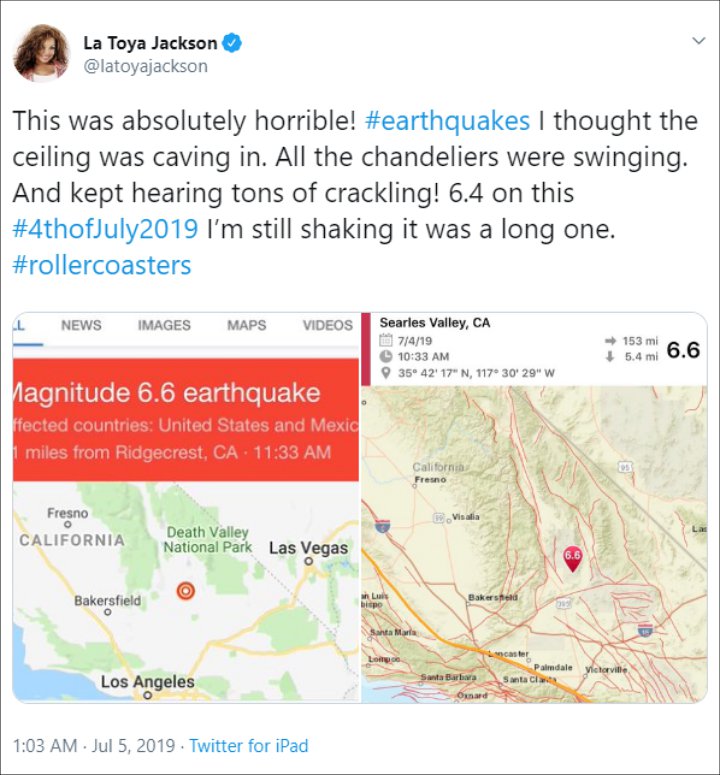 Veteran singer Nancy Sinatra added, "7 decades in SoCal and many quakes but this is the first one in my apt (apartment) building. I'm on the 10th floor and it was scary because the building was swaying for about 2 minutes. 6.4 + two aftershocks so far."

Lana Del Rey, Gabrielle Union, and Elizabeth Hurley also posted about the earthquake, while actress Patricia Heaton revealed it had made an already bad morning worse. "Hey, I just got sideswiped on my way home from the pharmacy and we just had an earthquake. So, woo hoo! Happy Independence Day," she said in a video posted on Instagram. "Thinking I should maybe stay away from the fireworks...!"

And, prior to the magnitude's downgrade, action man Dwayne 'The Rock' Johnson urged those closest to the epicentre to stay safe.

"6.6 is strong. We felt a lil' movement here in the valley, but all good," he tweeted. "Prayers to those (near the epicentre)... Be safe, stay prepared. #mothernature."

Even country superstar Reba McEntire was rocked by the tremors all the way in Las Vegas.

Sharing a photo of the earthquake headlines on TV, she wrote. "Wow! I felt it in my hotel room here in Las Vegas! Very scary!"