The 'Chandelier' hitmaker finds herself under fire for her look at a past concert after she offered her support to Scooter Braun amid his ongoing feud with the 'Shake It Off' singer.

AceShowbiz - Sia Furler has hit back after being accused of using blackface by Taylor Swift fans, after the "Chandelier" hitmaker offered her support to Scooter Braun amid his ongoing feud with the "Shake It Off" star.

The disagreement between Taylor and Scooter, following the sale of the Big Machine Label Group - which holds all of the singer's master recordings - to Justin Bieber's manager, hit headlines at the end of last week (ends June 30). Various names have come forward to voice their support for either Taylor or Scooter, with Sia calling the music mogul a "good kind man" in a tweet on Monday (July 01).

Her decision to ally herself with Scooter didn't go down too well with Taylor's fans, however, and some of them quickly dug up a picture from 2011 and accused Sia of performing concerts in blackface.

But responding to the accusations on Twitter, Sia insisted she wasn't using blackface - the controversial makeover white people adopt to look like black figures - but was just trying to hide her identity in the time before she adopted her now iconic face-covering wig.

"For the swift fans trying to make out that I would ever do blackface please see this video," Sia wrote alongside a clip from the show the photo was taken from. "I was painting myself into the backdrop, it was a precursor to the wig..." 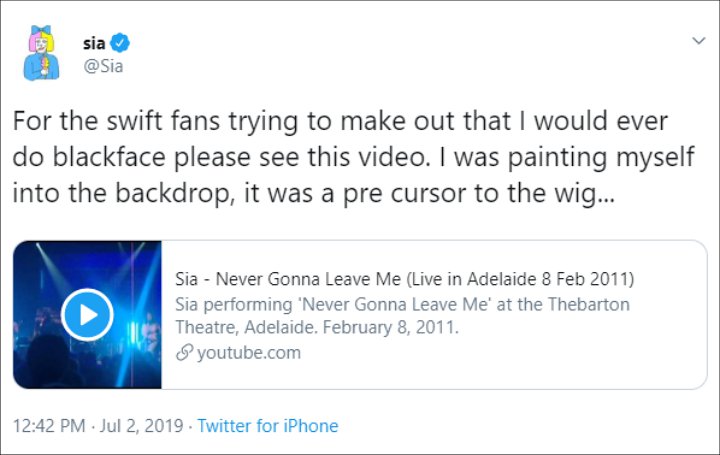 Her explanation wasn't enough to calm some followers, however, with one writing: "Idk (I don't know) about the black face claims. But i can tell you that it is WAY more than just the "Swift fans" upset with you about your support of Scooter, including myself. It's sad to realise who you really are."

Another commented: "I love you so much but I think you need to re-evaluate your stance on the scooter situation. Can't wait for new music."

Tess Holliday Prefers to Identify Self as Pansexual Rather Than Bisexual

Taylor Swift Never Gets the Chance to Buy Master Recordings Back, Lawyer Clarifies

Jonas Brothers Shelve New Album as Their Reunion Is 'Effectively Over'