In related news, the actress' husband Dax Shepard recently opened up about how their daughters reacted when they knew that both of their parents are famous.

AceShowbiz - It looks like Kristen Bell will be more careful when it comes to the things that her daughters play with after this. The actress and husband Dax Shepard had a scary false alarm when their youngest daughter Delta accidentally shoved a jewel up to her nose.

Kristen shared the terrifying moment with her Instagram followers, writing, "Right before this photo was taken my youngest daughter shoved a jewel up her nose up to her brain and we jumped in the car headed to the emergency room." Fortunately for the couple, the problem was solved even before they arrived at the hospital.

"On the way she snorted it out and we re-routed and went to [NBC's 'The Good Place'] #FYC panel instead," the "Frozen" voice actress continued. 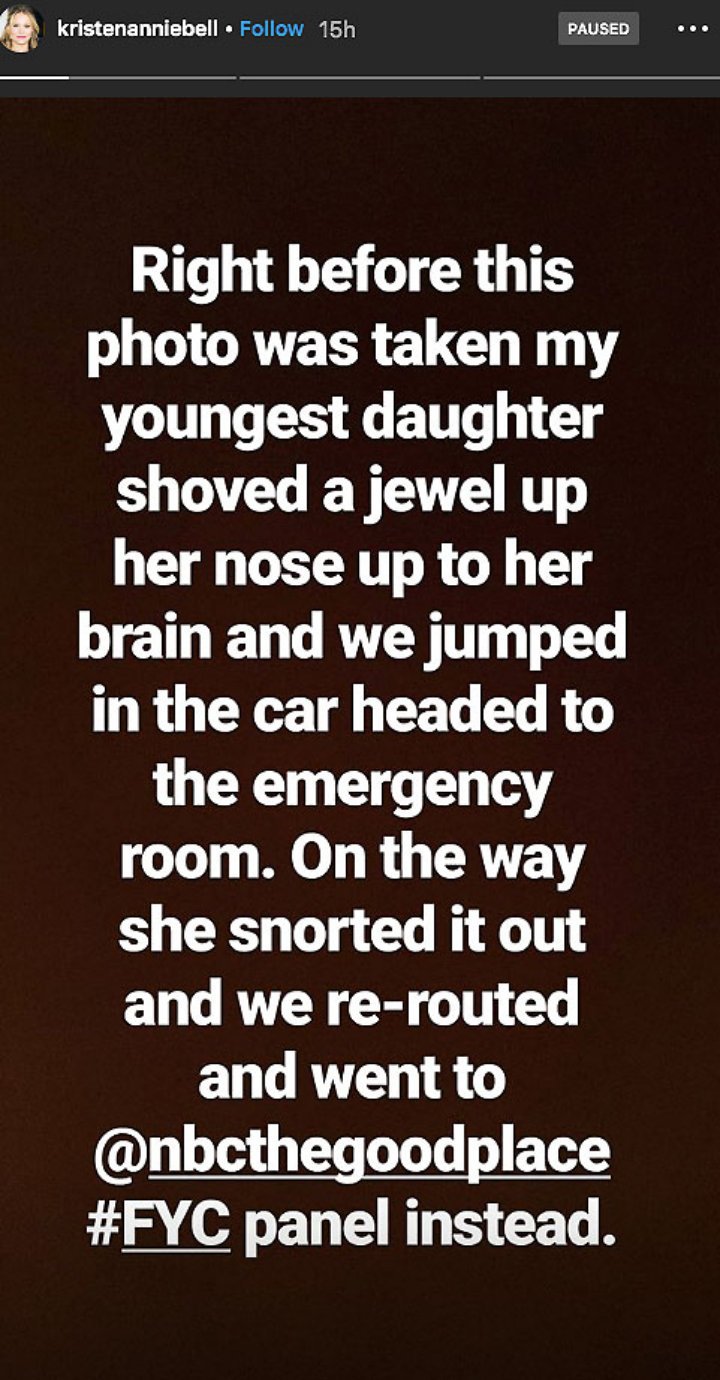 Delta is Kristen and Dax's second child together. The couple, who got married at the Beverly Hills County Clerk's Office in October 2013, also shares a six-year-old daughter named Lincoln. While the two have opted not to share pictures of their children on social media, they don't avoid speaking about them in public.

Recently, Dax opened up about the moment when Delta and Lincoln found out that their parents are famous during his appearance on "The Late Show with Stephen Colbert". He said, "They know that mom in Princess Anna from 'Frozen', they know that, they understand it. They've been to set, they've seen us work, they have seen billboards around town, and people have taken photos of us when we're out and about."

But they were apparently clueless that Dax and Kristen are famous, until one of them pressed him as to why people knew him. When the "Parenthood" alum said that the couple is famous, she flipped out. "She understands how we're making a living, but the word 'famous' was its own thing, like at kindergarten, I guess we were all of a sudden Taylor Swift or something -- or Pink," he said to a laughing audience.

Getting Back Together? Bradley Cooper Spotted at Irina Shayk's Apartment