Though stressing that she still believes the 45th President deserves to be locked up in prison, the 'Strong Enough' hitmaker does offer an apology for her stupid Big Bubba tweet.

AceShowbiz - Cher has apologised to fans for making light of prison rape in her latest rant against U.S. leader Donald Trump.

The pop superstar took to Twitter on Wednesday night, May 29, after Special Counsel Robert Mueller staged a news conference about his investigation into the President's alleged election tampering.

Mueller revealed federal rules prohibited him and his team from charging a sitting President with a crime but added, "If we had had the confidence that the President clearly did not commit a crime, we would have said so."

Cher ran with the comment and called for an abrupt end to Trump's presidency, tweeting: "I Would *love* 2 See trump Impeached, Brought 2 Trial, *locked* Up In *prison* & Toy Boy Big Bubba...!! I WANT WHAT'S BEST 4 DEMOCRATS AND DEMOCRACY."

She later deleted the tweet and early on Thursday, she issued an 'apology' that read: "This is Not Apology, It's a Cher 'wtf (what the f**k) Moment'. Dont Usually Delete My Twts, But Sometimes I Need 2 Check Myself. What I Thought Of As Stupid Joke 'On Paper',Went 2 Far. Think trump Belongs In Jail, but Big Bubba Joke Was Wrong. If I Twt, I Have a Responsibility." 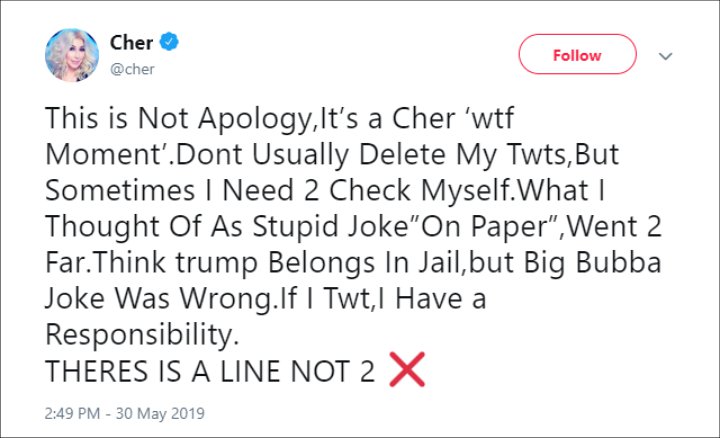 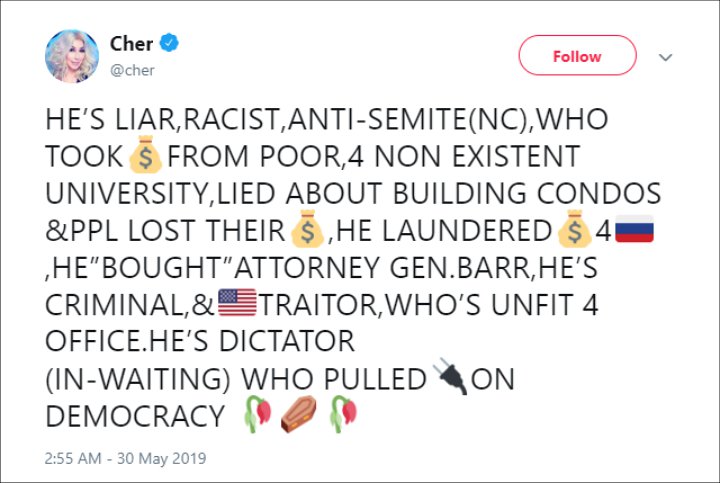 She went on taking a jab at the president.

Cher then took aim at Trump again after reports suggesting the President's late rival, war hero and Senator John McCain's name was covered on his own battleship, so the President wouldn't see it during a tour of Japan. 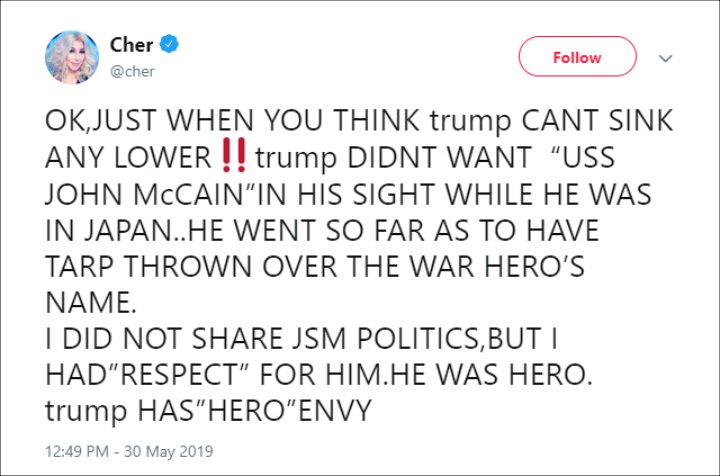 Cher brought in his late Rival John McCain into the topic.

"OK,JUST WHEN YOU THINK trump CANT SINK ANY LOWER‼️ trump DIDNT WANT 'USS JOHN McCAIN' IN HIS SIGHT WHILE HE WAS IN JAPAN..HE WENT SO FAR AS TO HAVE TARP (tarpaulin) THROWN OVER THE WAR HERO'S NAME. I DID NOT SHARE JSM (McCain) POLITICS, BUT I HAD 'RESPECT' FOR HIM. HE WAS HERO. trump HAS 'HERO' ENVY."