Some fans of the royal family are criticizing the former star of 'The West Wing' for being 'shallow,' while others claim that his comment was also offensive to British men in general.

The actor was asked if he considers himself more or less vain than British men in a new interview with U.K. broadsheet The Daily Telegraph and reportedly responded with a dig at the second in line to the throne.

"That's a low bar! Can we talk about William?" he snorted. "I mean, the future king of your country let himself lose his own hair, so when I say British men set a very low bar..."

"Honestly, one of the great traumatic experiences of my life was watching Prince William lose his hair. He's going to be the f**king king of England!"

"There's a pill (to combat hair loss)," the former "The West Wing" star added. "The first glimmer that a single hair of mine was going to fall out, I was having stuff mainlined into my f**king veins. And that’s what I did for the next 30 years."

Soon after the interview was published on Tuesday, May 28, royalists quickly rushed to William's defence, with one fan of the Prince stating: "@RobLowe you must be joking! Why on earth would you mock anyone for their hair loss...?! Are you really that shallow?"

Another added: "@RobLowe did you even stop to think how it would make William feel for you to draw attention to this??? Are you NOT listening to William's mental health statements?" 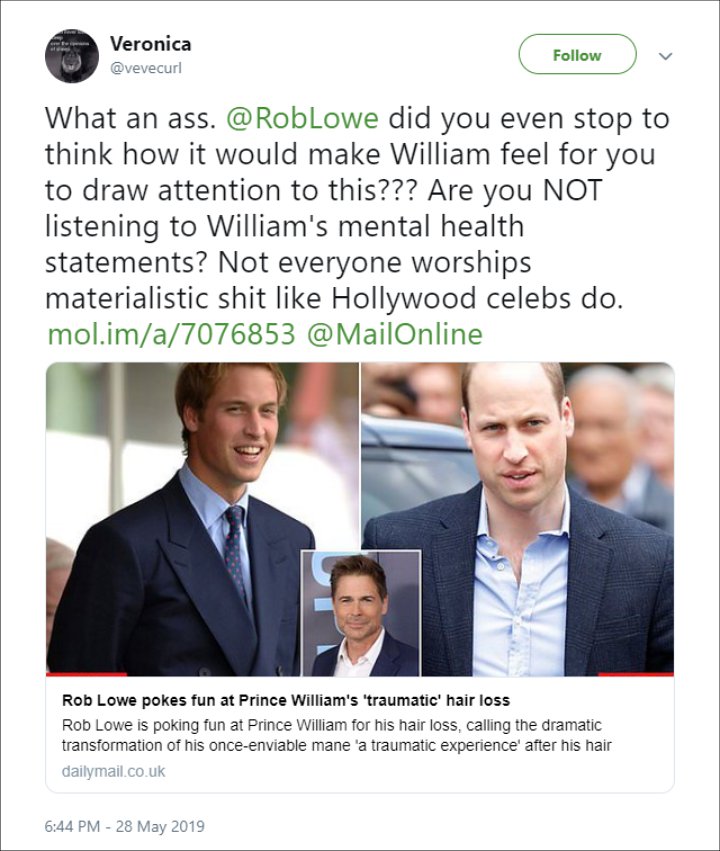 Another accused Rob Lowe of not listening to Prince William's statement about mental health.

William recently launched a mental health drive, in which he urged people to be kinder to those in need.

Others were quick to point out how offensive Lowe's comments were to British men in general.

"Not cool at all, Rob - insulting not only the Prince, but all British men, over something as ridiculous as hair," one Twitter user wrote.

One other pointed out that his comment was offensive to British men in general.

Ariana Grande Apologetic After Sickness Forces Her to Reschedule Concerts