Contrary to the 'Dog the Bounty Hunter' star's claim, Dog's daughter Lyssa Chapman claims she did write to her stepmother Beth on Mother's Day and didn't block her calls.

AceShowbiz - Beth Chapman's feud with her stepdaughter Lyssa Chapman has turned into a he said, she said situation as the latter has told the story from her own perspective. After the reality TV star accused Lyssa of snubbing her family on Mother's Day and from the graduation celebration of Lyssa's daughter Abbie, the daughter of Beth's husband Duane Chapman a.k.a. Dog the Bounty Hunter has defended herself on Twitter.

Beth earlier tweeted on Thursday, May 23, "I'm very disappointed today. [K]nowing that not only did my daughter @BabyLyssaC not acknowledge me on Mother's Day yet texted some of my friends wishing them a HMD. She [also] decides to exclude her dad and I from [Lyssa's daughter Abbie Mae Chapman, 16] graduation on Friday. I would have moved a mountain to be there." 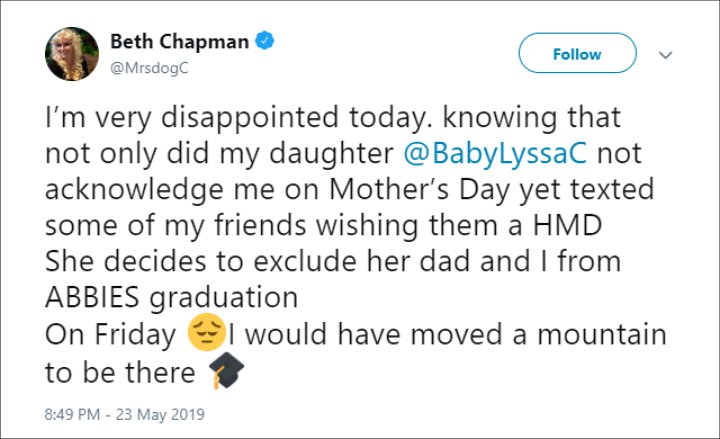 Claiming that she wishes to get close to her grandchildren despite her feud with Lyssa, Beth said in a reply to a fan's tweet, "[I've] only got a few things to look forward too. Our kids can be hurtful sometimes. I just hate that the grandkids get tied up in mom's mess." When another user asked why she decided to reveal her family issue on social media, the 51-year-old explained, "Because she doesn't answer my calls and has us blocked, so I'm going to reach my child how e Er I see fit."

Beth also responded to another user's comment which told her not to "sweat the small stuff." Disagreeing, the "Dog the Bounty Hunter" star said that "not being invited to my granddaughter's graduation when she graduating a year early is a huge milestone to miss. I'll decide what's best for me to get upset about." 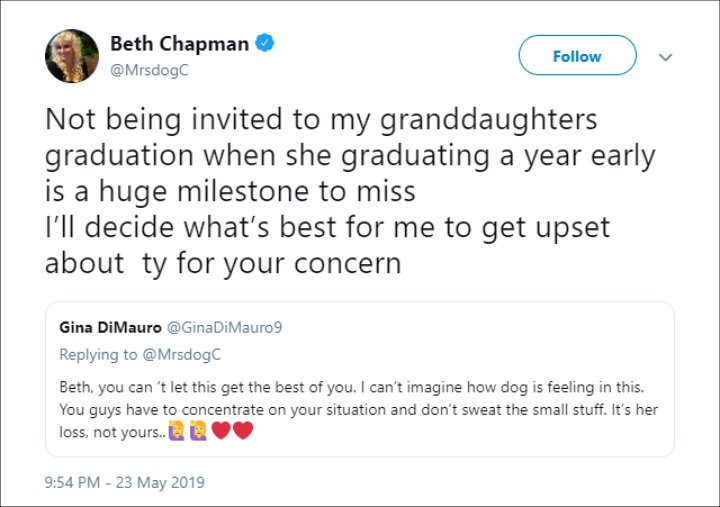 Noticing Beth's tweets, Lyssa defended herself and accused her stepmother of lying about the Mother's Day snub. "I did write on Mother's Day," she wrote back, adding, "You had no plans to attend Abbie's graduation as you're off island." She also claimed that she did not block Beth's calls.

Responding to Lyssa's now-deleted tweet, Beth wrote again, "Maddie texted grandma you did nothing as usual we didn't know when Abbie's grad was, yes we would have been there! your not off the hook Lyssa you Invite your parents regardless I bet Leigh's parents we're invited. we could have been home in time you chose not to even tell us." 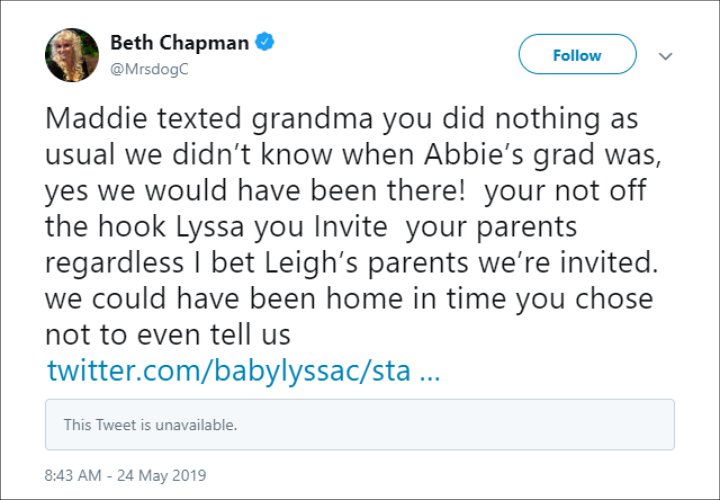 Lyssa is Dog's wife with his third wife Lyssa Rae Brittain. The couple was married in 1982, and divorced in 1991. They also shared daughter Barbara Katie Chapman, who died in a car crash in 2006, and son Tucker Dee Chapman.

Lyssa admitted in 2016 that she didn't have a close relationship with her father. "I [falsely] accused my father of raping me when I was 11," she told Fox News. "I had been molested by a friend of his. It was a horrible life that I never wanted to go back to, living with him and Beth and the fighting and the drugs. When I got to my mother's, although she drank, it was much more peaceful. I was in school, I had friends, I was willing to do anything to not go back."

YFN Lucci Targeted in Drive-By Shooting Again Within One Week